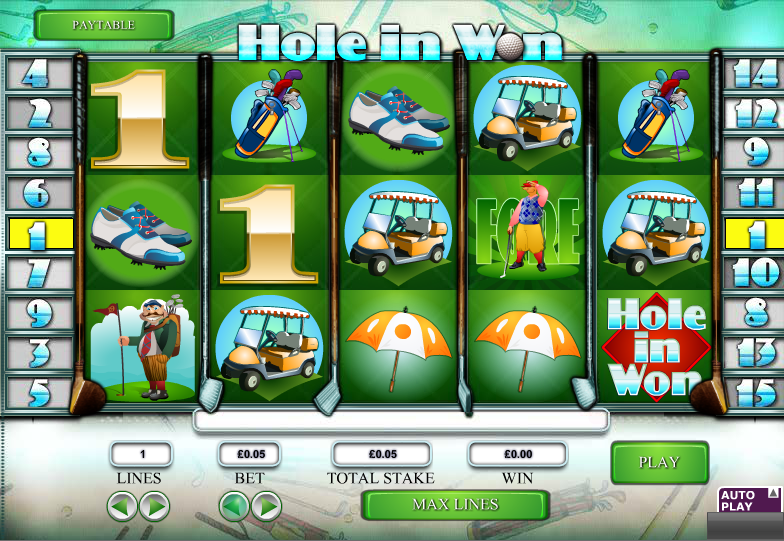 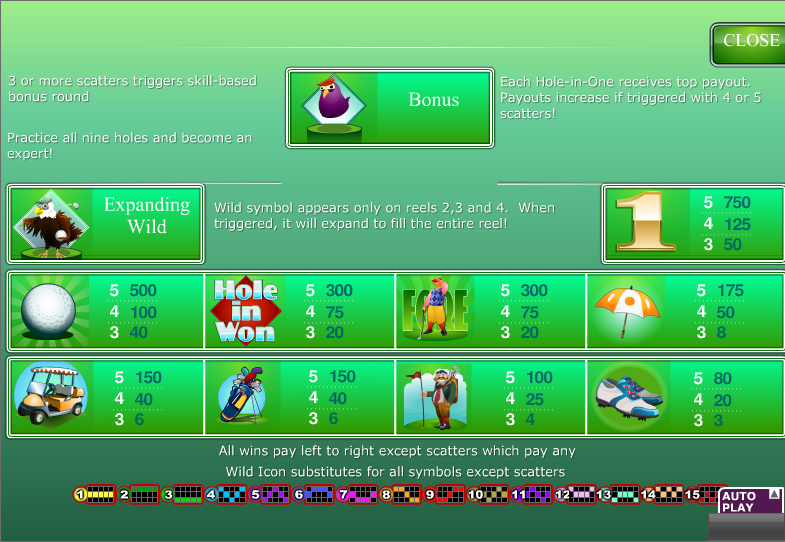 It’s difficult to describe golf as a sport in the traditional sense; you hardly need to be an athlete to take part in this pastime and it appears to be more like an opportunity for a stroll interrupted by a very short burst of activity. We’ve played a few golf-themed online slots over the years and the effort you put into playing one of these games is probably about the same as actually playing golf on a proper course. Here’s one more to enjoy – it’s called Hole In Won and it’s by Rival Gaming.

Hole In Won plays out over five reels and fifteen paylines and it’s quite a humourous look at this pastime. There are only nine basic symbols and they are all golf-related, including golf shoes, two different players, a bag of clubs, a golf cart, an umbrella, a golf ball, a Hole In one logo and a big gold number one.

An eagle is the wild symbol and he also expands when he appears. This means the eagle will expand to fill the entire reel, giving the player lots more opportunities to make wins. The scatter symbol is a small purple bird (a birdie?).

Hole In One Bonus

There’s a actually a skill game available here and that’s pretty unusual in a slot. The feature is triggered by landing three, four or five of the purple birds anywhere on the reels.

You will now get to play a mini-golf game in which you play one hole and try to get a hole in one. The prize increases if you trigger the feature with four of five scatters. Only one hole is available per round so make sure you get the ball in the hole.

You control the speed and the direction of the ball with the mouse cursor.

The best way to get those ‘holes in one’ is to practise; you can do this by playing the game until you’ve mastered the technique.

There’s nothing special about the gameplay but the feature is what helps this game rise above the norm. It’s rare to find a bonus game with player interaction required and this mini-golf is really entertaining, especially if you can sink your shot.