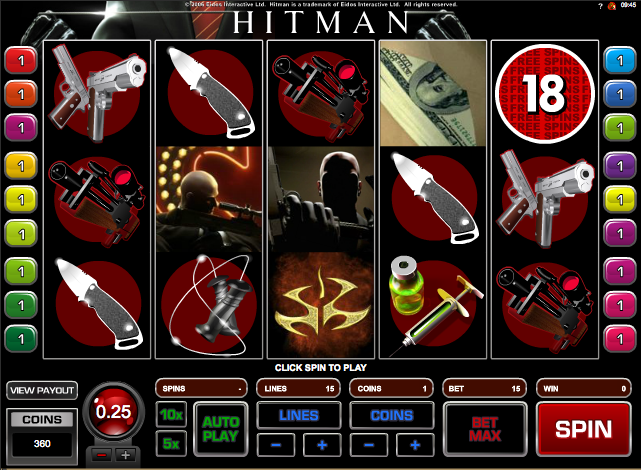 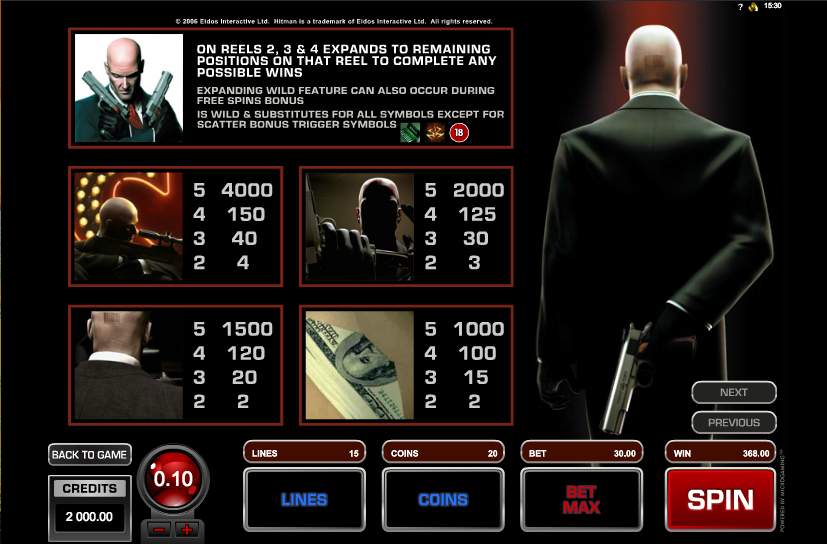 If you’ve played the video games and watched the film, then now’s as good a time as any to check out this online slot from Microgaming.  Hitman tells the story of the hired assassin who travels the world despatching his victims – but of course only the ones who deserve it. This slot is packed with bonus features so should offer something for everyone.

Hitman contains fifteen paylines spread out over five reels and it captures the essence of the video games and movies very well – the haunting soundtrack also adds to the overall atmosphere.

Anyone familiar with the franchise will recognise most of the symbols in this game and they include a knife, a garrotte, a deadly syringe, a sniper rifle, pistols, an even lope of money and three views of our eponymous hero.

The Hitman with crossed pistols is the wild and there are three scatter symbols – a laptop, an ’18’ logo and an insignia – which activate the bonus features.

If you are lucky enough to land the Hitman wild on reels two, three or four then it will expand to fill all positions on that reel, helping you to make more winning combos.  You’ll also get a nice animation of our hero walking off through a door.

This is where the killing happens and to start the round you need to land the laptop symbol anywhere on reels three, four or five.  You will now see a line-up of suspicious-looking characters and must decide which one to kill; each one has a range of bonus values attached and when you select one it will reveal your award.  The next step is to select a weapon and then a multiplier will be awarded.

Three of the ’18’ symbols on reels three, four or five will reward you with 18 free spins and a 2x multiplier for all wins.

During this feature the expanding wilds remain active and the other bonuses can be triggered, as can more free spins.

If you can get three of the gold insignias to land on reels one, two or three you will trigger this feature; all you have to do is select one of those symbols to receive a random coin award.

Keep the sound on for a start, it really adds to the atmosphere.  You don’t need to play with all paylines active as the features are triggered by scatter symbols but the payouts will be proportionately bigger if you do.

You can’t argue with a game that contains so many bonus features and you wouldn’t want to argue with the Hitman anyway. This slot is well worth a few minutes of your time so don’t pass it by.