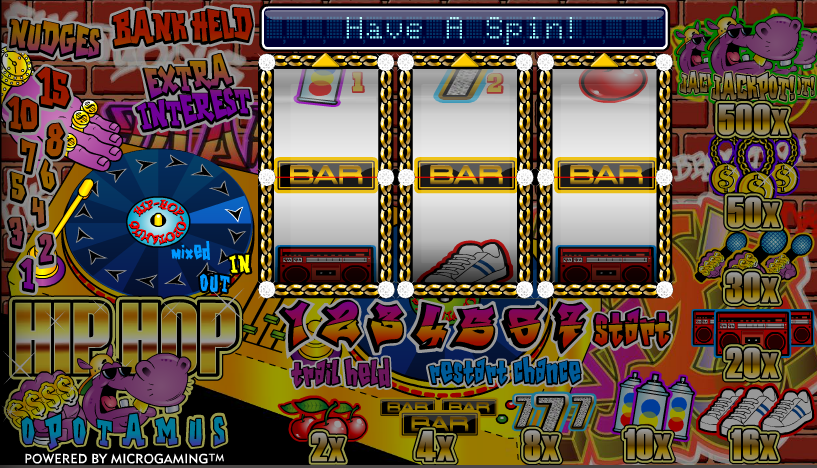 Homer Simpson once waxed lyrical about the combination of nuts and chewing gum and it’s fair to say that quite a few online slots throw together some odd combinations. Hiphopopotamus from Microgaming is one such game which brings together hip hop music and the hippopotamus in a merger which surely we’ve all been waiting for.

Hiphopopotamus is a UK-style fruit machine with three reels and one payline; the whole thing looks like the set of a Run DMC video with mixing decks, Adidas Shell Toes and graffiti strewn around. The high value symbols are all theme-related and include spray cans, trainers, ghetto blasters, microphones and gold chains. The hippo himself is the highest paying symbols worth 500x your stake.

To reach this separate game you will need to complete the number trail underneath the reels; this is accomplished by landing symbols which include a small number on the payline, or using the bonus which is awarded when you land that particular symbol.

When the board game starts you begin in the bottom left hand corner of the screen and try to work your way up and across the squares by guessing the Hi/Lo gamble correctly. The further you progress, the more valuable the prize and landing on a bonus square will reward you with one of several prizes including an extra life or a guaranteed win.

When you land a win in the base game, the record deck to the left of the reels will spin and give you a chance of doubling that prize. The deck will light up gradually if you fail to land a winning combo and increase your chances of this repeat offer.

When you see ‘Shifta’ on the notice board above the reels, they will automatically rearrange themselves into a guaranteed win.

Funk You Up Feature

This is a randomly awarded bonus and the notice board will cycle quickly through the symbols; just press the ‘Stop’ button to select a symbols and win that award.

Nudges will be familiar to fruit machine fans – they are randomly awarded and allow the player to jog the reels down to try and make a winning combo or collect trail numbers.

Holds are also regularly awarded randomly and let the player freeze one or more reels in an attempt to win something on the next spin.

Although the feature is what we’re all aiming for, it’s worth noting that it’s very hard to progress any distance up the board so be prepared to accept the less valuable prizes. You may or may not be surprised that the odds appear to be stacked against the player during the Hi/Lo gamble. 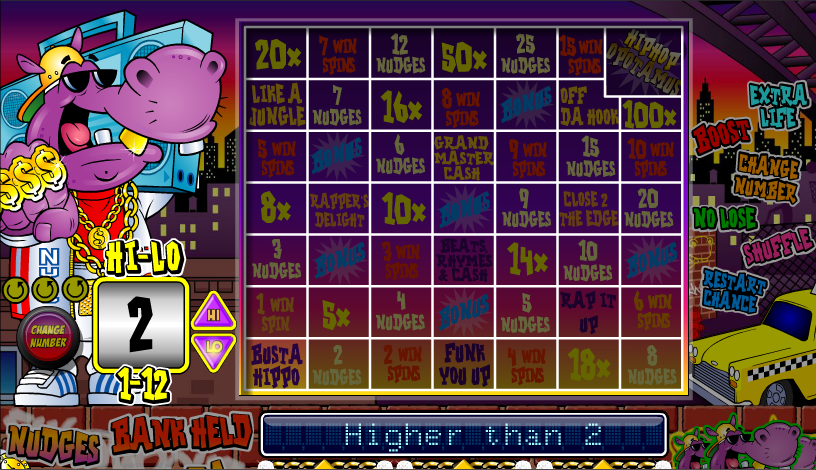 This is an entertaining game but it seems extremely hard to win any money while playing it. The best strategy, as we’ve mentioned above, is probably to take small and regular wins instead of reaching for the stars. It’s enjoyable enough though.