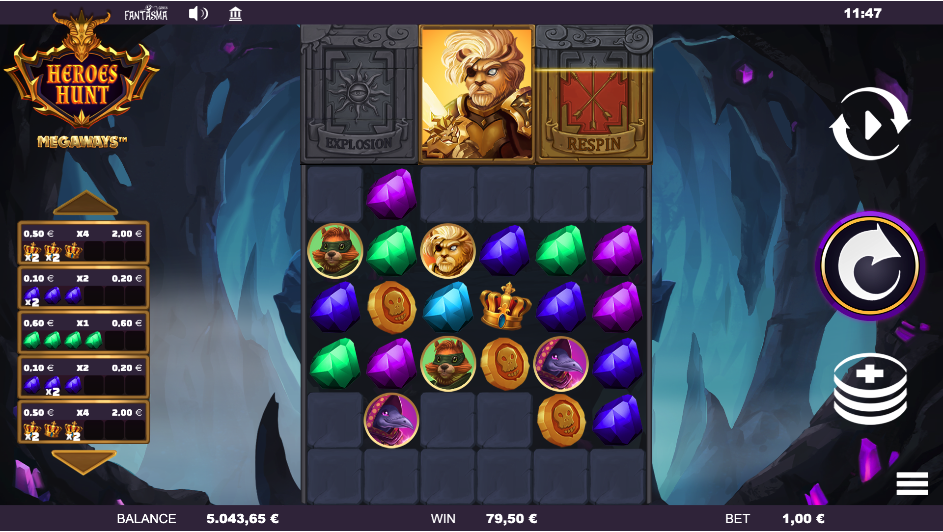 This online slot from Fantasma Games takes us on a journey to a fantasy realm under threat from the Fiend of Dreadmaw; it’s called Heroes Hunt Megaways and it follows the adventures of a wizard, a warrior and an archer as they battle the dragon and attempt to win us cash in the process.

Heroes Hunt Megaways is a six reel slot with six rows and a potential 46656 ways to win; these paylines work a little differently from the standard Megaways because here there are ‘blockers’ on the reels which are worth nothing and get in the way. Destroying these blockers (in ways we’ll explain shortly) increases the number of paylines available up to that maximum number.

The high value symbols include the dragon, the wizard, the warrior, the archer, the crown and the coin; gems in various colours make up the lower values.

Each symbol in a winning combinations will disappear to be replaced by more falling in from above; new combos can then be formed and this process continues until there are no more wins.

When you first load up this game you’ll be asked to select one of the heroes who will then appear above the reels; these heroes are accompanied by the following features:

Landing a chest symbol on the reels may award +1 XP of one of the unchosen heroes and when it their XP reaches 3 they become unlocked also.

There are two types of free spins, Mimic and Dragon:

Heroes Hunt Megaways may seem a little complicated to begin with but once you get to grips with those heroes and what they’ve got to offer it all falls pretty much into place; there’s plenty of action going on here with lots of features activating regularly and some big wins once the Dragon free spins are triggered.