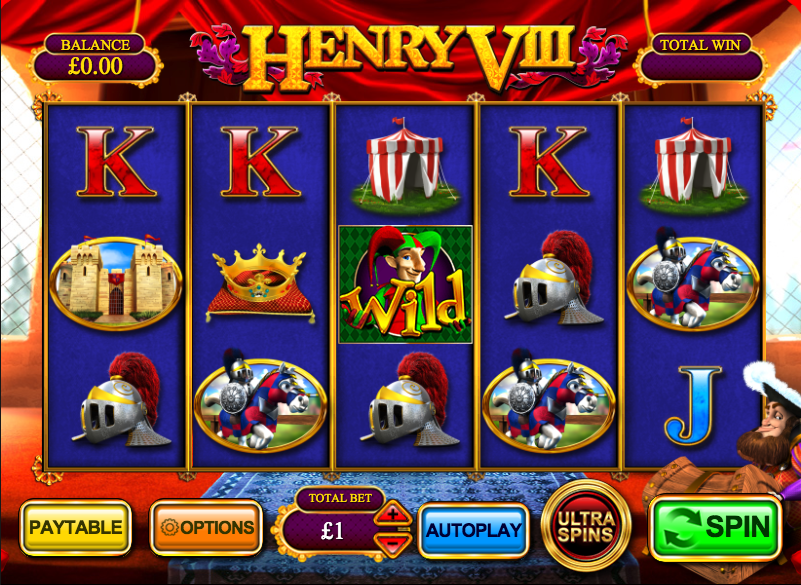 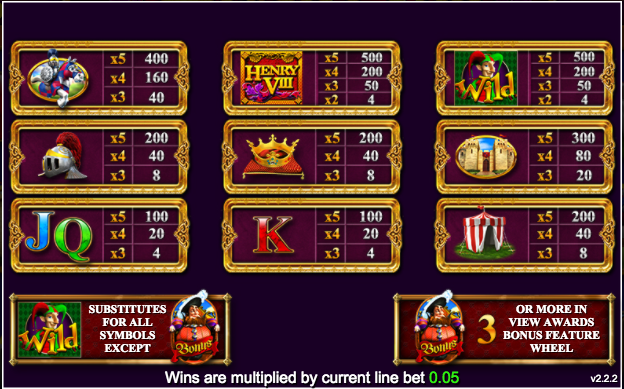 Henry VIII ruled England from 1509 until 1547 and is best remembered as the driving force behind the separation of the Church of England from the Roman Catholic Church; he is therefore ideally suited as a theme for an online slot machine and Inspired Gaming have provided us with just such a game.

Henry VIII is a five reel slot with three rows and twenty fixed paylines; there’s a colourful and cartoonish design to this game with the gold framed reels sitting against a backdrop of a lush palace interior – Henry himself watches over proceedings from the bottom right hand corner.

The high value symbols are represented by a knight on horseback, the game’s logo, a helmet, a crown on a pillow. a tent and a view of Henry’s castle; J, Q and K and the lower values.

The wild symbol is appropriately a jester and he will substitute for all others to make a winning combo except the the Henry scatter icon.

This is triggered by landing three or more of the Henry scatter symbols anywhere in view and initially you will be asked to spin the wheel which will determine one of three possible awards:

These are awarded randomly on any non-winning spin:

This is an optional extra bet which awards the following:

£20/30 Stake – buys entry into the pyramid feature which awards the bonus game or a number of Ultra Spins (more valuable spins).

Henry VIII is a slot fit for a king with some cheerful graphics, numerous bonus features and the chance to pay a bit extra for more excitement – it comes with an RTP of 95.00%.