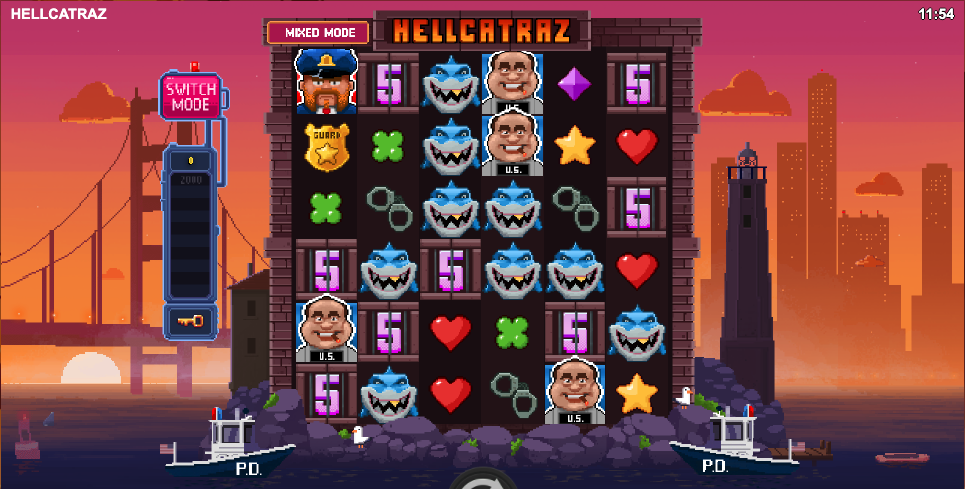 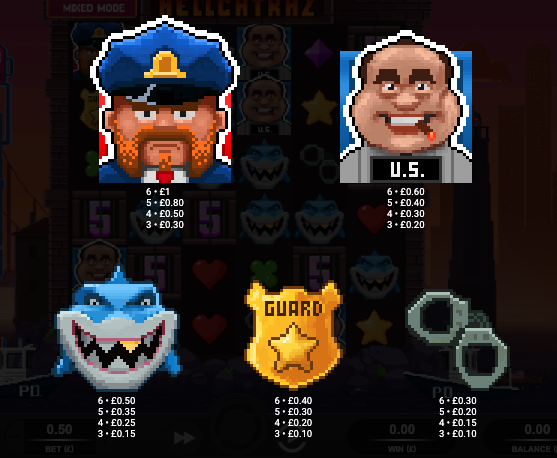 If there’s one place worse for mid-2oth century criminals then the famous prison island of Alcatraz then it’s surely Hellcatraz, the theme and the setting of this online slot machine from Relax Gaming with some funky, pixel graphics and two gameplay modes.

Hellcatraz is a six reel slot with four rows and a massive 46,656 ways to win; those reels spin on a small island with the sun setting in the background over San Francisco and the Golden Gate Bridge

The high value symbols include the prison warder, the prisoner, the shark, the warder’s badge and the handcuffs; the gold star, the heart, the green star and the purple diamond represent the lower values. The big ‘W’ is wild and it will replace all other symbols to help form wins.

Each symbol in a winning combo will disappear and be replaced by more falling in from above after which more matches can be made to continue the process.

Each time you spin the reels there are Mystery Symbols which display counters between one and five and with each successful cascade the number on those Mystery Symbols decreases by one; once it reaches zero all those symbols with matching numbers will reveal the same symbol.

There are two game modes from which to choose:

You’ll need to collect 2000 keys to trigger the free spins and random numbers of keys overlay symbols at random – you can also buy straight into the feature for 200x the total bet or buy the remaining keys required for £0.10 per key.

All Mystery Symbols will reveal matching symbols instantly and if a Golden Symbol is revealed then creating two cascades will award an extra spin.

Hellcatraz takes us back to pixely basics in terms of graphics but it also introduces some clever features to enjoy and two game modes which you can switch between; it’s worth noting that the RTP for the Lockdown mode (96.46%) is slightly higher than for the Mixed Mode (96.30%).