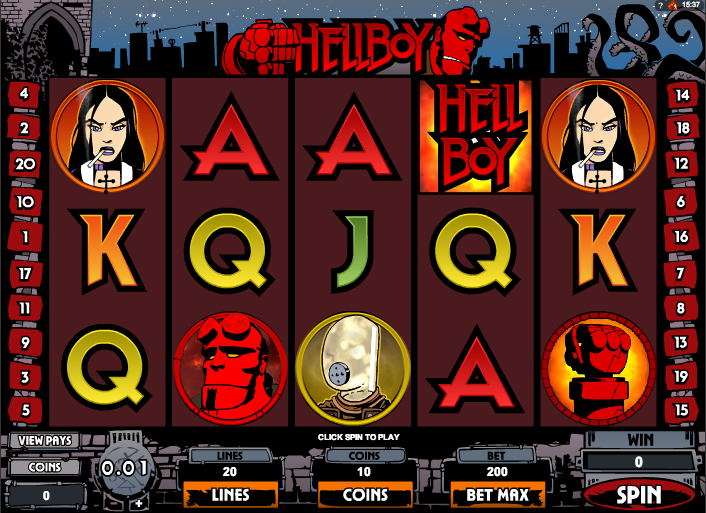 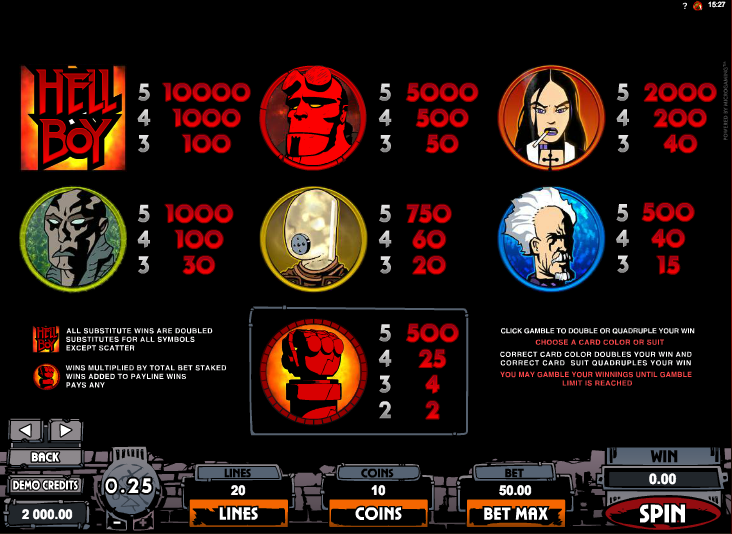 The Hellboy movies have been two of the outstanding superhero films of recent years and now you can play an online slot machine based on the story of the red-horned demon who works for the United States Bureau for Paranormal Research and Defense. Search for the relic in the Underworld bonus or grab ten free spins in Supermode.

Hellboy is a five reel and twenty payline slot and the graphics are reminiscent of the style of Jamie Hewlett – an artist with whom comics fans will be familiar.  A city centre skyline is the backdrop to the reels and the main symbols are the characters from the film including Hellboy, Liz Sherman, Abe Sapien, Trevor Bruttenholm and a baddie.  10, J, Q, K and A are the low value symbols.

The Hellboy logo is wild and the scatter symbol is Hellboy’s iconic big red fist.

This is Hellboy’s mini-game and it’s triggered by landing three or more of the red fist symbols anywhere on the reels.  You must guide Hellboy along four levels of tunnels, making the right choice each time to ultimately progress to the Relic of Power which will award the big bucks.  Along the way Hellboy must battle various creatures and a blocked tunnel means the feature is over.

This is a randomly awarded bonus during which you’ll receive ten free spins. During these spins up to three positions on the reels will be turned wild and remain that way for the duration of the feature.

You;re almost certainly a fan of gambling and after each win theres the opportunity to double your most recent win by playing the gamble feature.  Click the ‘Gamble’ button underneath the feature to try and predict the next colour of the playing card to double your win; predict the suit to quadruple it. The maximum correct picks in a row is five.

Always use the gamble feature with care; the odds against continual winning picks are astronomical.  Collect the winnings from your first or second correct picks and head back to the base game.

This is a nicely designed slot and the graphics are pretty faithful to the original comic book; two bonus games and a gamble feature make it well worth playing.