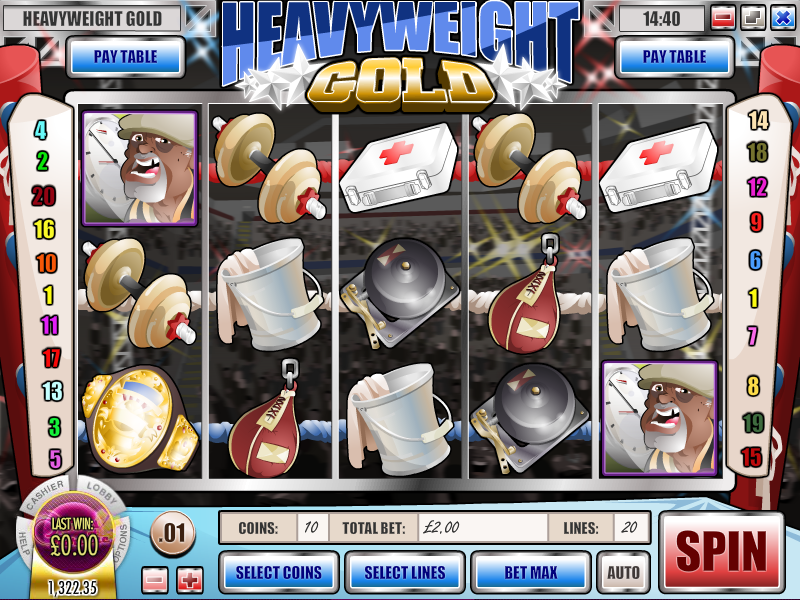 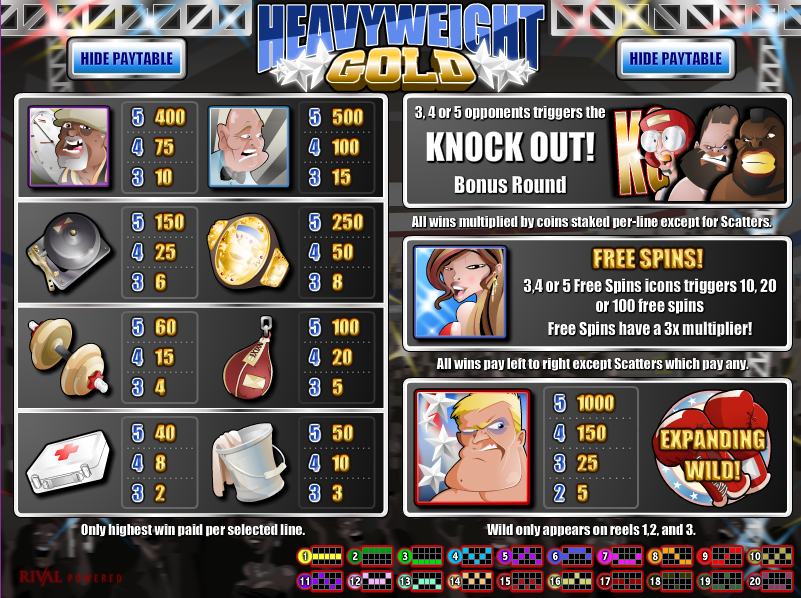 Pugilism is the theme of this classy online slot from Rival Gaming; it’s called Heavyweight Gold and it’s focus is the noble art of boxing – mano y mano in a small canvas ring cheered on by a huge crowd of dubious character. This is one of Rival’s i-Slots range of games which adds an extra layer of detail to the gameplay.

Heavyweight Gold features five reels and up to twenty paylines and the backdrop to the game is a boxing ring in a huge arena. All the symbols are boxing-related and include a bucket/towel,  a first aid kit, a dumbbell, a punch ball, a record deck, a championship belt, the trainer and the referee.

Special symbols include three separate opponents which are bonus icons, a ring girl scatter symbol and boxing glove wilds.  Those wilds appear only on reels one, two and three and if they can make a winning combo, will expand to fill that whole reel, giving you more opportunities for extra wins.

The ring girl is the key to these spins and you must land three or more of her anywhere on the reels to trigger this feature; you will receive the following:

As you can see from the video above, if you can land three or more girls during this feature, the appropriate number of extra spins will be added to your total.

This is good fun and it’s what sets these i-Slots apart from most online slots; it’s triggered by landing three or more of the opponents anywhere on the reels and your task is to defeat your opponent by hitting him at the right time and blocking his punches when necessary.

The opponents are easy to begin with but get progressively harder with each worth a bigger prize than the previous one. You will notice a new opponent on the reels after each fight and you only compete in one bout per feature trigger.

The fighting is not too tricky but it does get harder so use the initial bouts to hone your technique.

Slots with some player interactivity are an all-too-rare occurrence so this is a welcome diversion; it’s fun and fast-moving with several bonus features so give it a go.