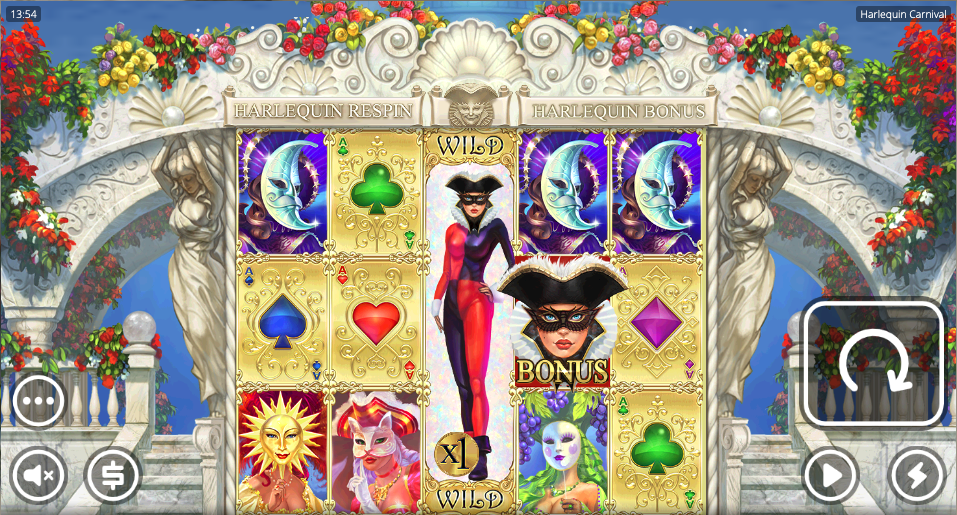 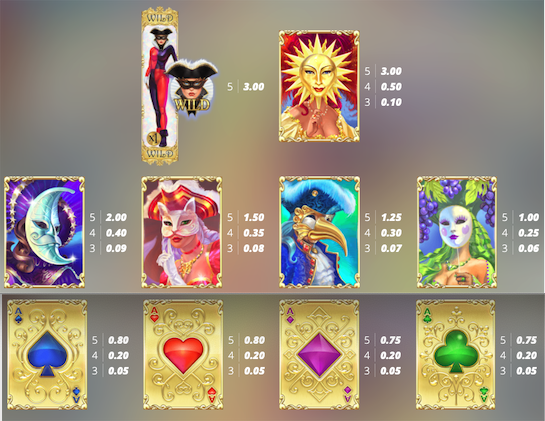 The traditional of the Harlequin originated in Italy in the 16th century but quickly spread around Europe in the following centuries; Harlequin Carnival is an online slot developed by Nolimit City and a very good-looking tribute to this comic character while also offering wild multipliers and free spins.

Harlequin Carnival is a five reel slot with three rows and twenty fixed paylines; those reels are inlaid into an ornate stone structure complete with statues on either side and roses of varying colours draped over the top.

The high value symbols are all masked characters from this ball including the sun, the moon, the cat, the bird and the vine; golden playing cards with symbols in blue, red, purple and green represent the lower values. The Harlequin is wild, she’s also four positions tall and she’ll replace all other symbols to help form winning combos; she only appears on reels two, three and four but will nudge into view if he lands only partially visible. Each nudge will increase the win multiplier by 1x. The single position Harlequin wild is also the scatter symbol.

When a Harlequin appears (or has nudged to) fully visible the Harlequin Respin is triggered in which that full wild reel will ‘walk’ the left on subsequent spins until it falls off the left hand side.

Landing three of the single position Harlequin symbols anywhere in view will award eight free spins initially but any more landing during this round will award one more.

The bonus will start with a full size wild Harlequin on reel five which will then start ‘walking’ to the left with each step increasing the starting 3x win multiplier by 1x up to a maximum of 7x. Collecting three more bonus symbols during this round will place another Harlequin on reel five to keep things interesting.

Harlequin Carnival looks amazing and its gameplay is very enjoyable too (and similar to Barbarian Fury from the same developer); the walking wilds are great but once the free spins are triggered and the Harlequin starts moving across the reels the big wins will kick in.