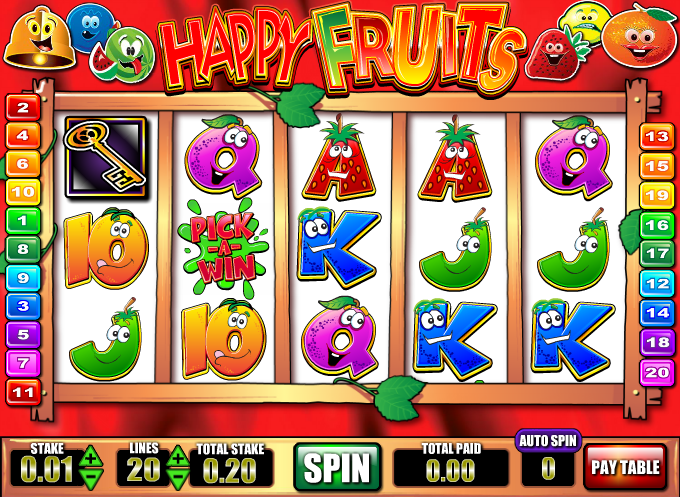 Do fruits have any emotions? Perhaps before they’re eaten, turned into jam, wine or some other foodstuff; Happy Fruits is from Mazooma Interactive and celebrates the short life of these tasty items. It’s a conversion from a physical slot contains several bonus features so keep reading to find out more.

Happy Fruits is a five reel game with three rows and up to twenty paylines. Assorted pieces of fruit dot the rather basic background and there’s some pleasant sound effects to accompany your gameplay.

There are only six main symbols in the base game, five of which are 10, J, Q, K and A but formed into fruity shapes. The Happy Fruits logo is the only other symbol.

The sparkling gold star is wild and there are three bonus symbols – keys, sevens and a green ‘Pick-A-Win’ splat – which activate the bonus features.

Landing three, four or five of the key scatter symbols anywhere in view will trigger this mini-game and you will get to play a three reel slot with just one payline. The idea is to collect symbols to fill up the spaces above the reels; when you have three and the space is full up, an extra multiplier will be applied to your bonus win.

The reels will keep spinning and the multiplier increasing until you have collected three of the killer tomato symbols at which point the round is over.

This is triggered by landing three of the seven scatter symbols on reels two, three and four. All you have to do is pick one of those sevens which will reveal itself as gold, silver or bronze. A cash prize and multiplier will now start ticking upwards – when it stops that’s your prize.

Landing three of the green splat symbols anywhere in view will trigger this feature; all you have to dis pick on those symbols to reveal a multiplier which will be applied to your win.

If you’ve played other Mazooma slots such as Rumble In The Jungle then you’ll know what to expect here; it’s perfectly playable though and we like the variety of features. The RTP of 95.00% is perhaps a little on the average side.