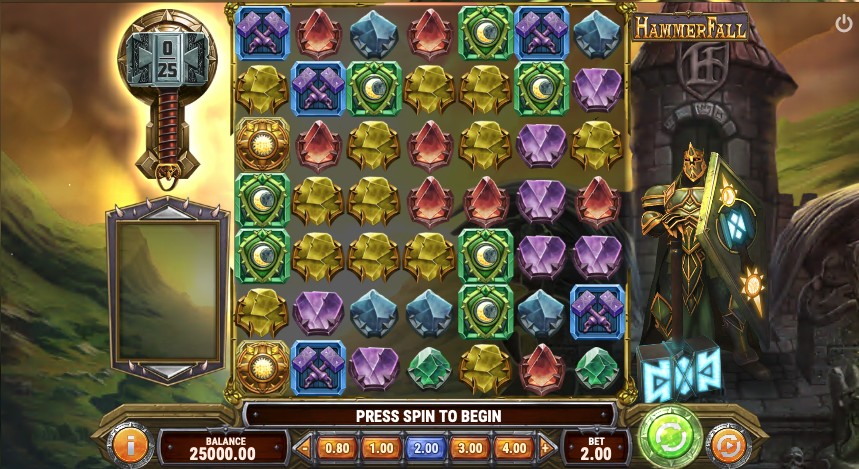 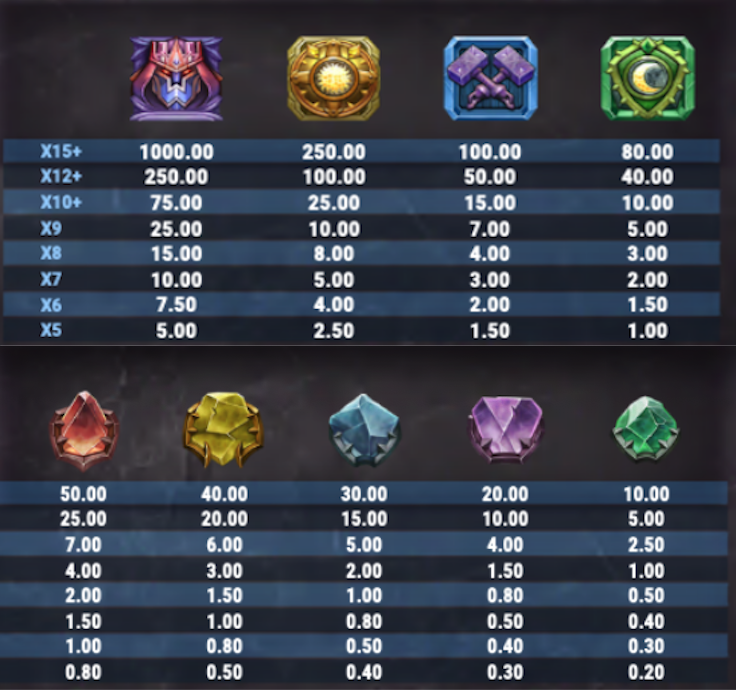 Fantasy worlds have inspired many on online slot machine over the years and Hammerfall is one more to add to that list – it’s developed by Play N GO and it’s an arcade-style reel spinner which has a cluster payline mechanic, three Song features and the Hammer High free spin.

Hammerfall plays out on the 7 x 7 gameplay area you can see above and the aim is to create clusters of at least five matching symbols connected horizontally and/or vertically – those symbols involved will then disappear and allow more to fall in from above, potentially creating more wins. There’s a scary, hammer-wielding knight on the right hand side and the backdrop can change according to the world we’re currently in.

The four higher value symbols include the knight, the gold shield, the hemmers and the green moon crest; five gems in various colours represent the lower values. The blue and red ‘H’ symbols are the wilds.

On each spin the grid will contain Super Tiles which are the positions surround by a blue light; if a combo is created using this Super Tile it will become wild for the rest of this spin/cascade and may also have a win multiplier of up to 3x attached.

These can be awarded at random on a non-winning spin:

Hammerfall takes place in three different worlds and the way to move to a new one is to trigger a Song Feature; these are activated by collecting twenty five symbols during a spin/cascade to charge up the hammer in the top left hand corner. Once charged the hammer will trigger the Song feature for this world:

This is triggered by filling the hammer with twenty five winning symbols and then ‘overcharging’ it by adding another twenty five in the same spin; you’ll now receive one free spins in which all Song features are activated one after another.

Hammerfall is exactly the type of arcade-slot we like with those cascading reels offering the promise of Song features and the Hammerfall bonus; the Destruction mini-features also hit regularly to help things along. Highly recommended!

Hammerfall is a fantasy-themed video slot from Play N Go with a cluster gameplay mechanic.

The Return To Player percentage for Hammerfall is 96.20%.

How To Win On Hammerfall?

Where can I play Hammerfall?