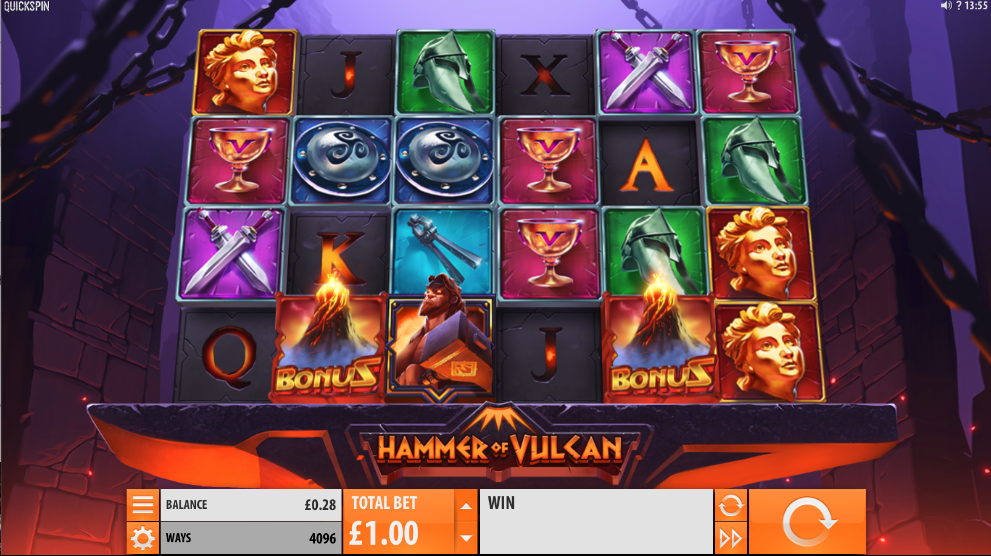 In Roman mythology Vulcan was the god of fire and his implement of choice was a large blacksmith’s hammer; this online slot from Quickspin gaming is dedicated to this fiery deity, it’s called Hammer of Vulcan and from £0.10 per spin it offers players the chance to win free spins and extra wild symbols.

Hammer of Vulcan is a six reel slot with four rows and 4096 ways to win; the symbols drop down onto a huge anvil as the reels spin so of course the setting is some mystical workshop where rock and chains are illuminated by sparks and lava.

High value symbols include the golden golem, the chalice, the crossed swords, the helmet, the shield and the tongs; X, J, Q, K and A represent the lower values. Vulcan himself is wild and he’ll replace all standard symbols to create winning combos – he also has his own feature described below. The volcano is the bonus symbol.

Every time a wild symbol lands on the reels the hammer will clang down onto the reels and transform all wilds below it on that reel into wilds also.

Landing at least three of the volcano bonus symbols anywhere in view will award the following:

The Hammer Strike is also active during the spins but here it will increase the win multiplier by 1x also; one, two, three or four volcanoes landing during this round will award an extra 1, 2, 4 or 6 free spins respectively.

As a nice final touch the final spin must be a win so the reels will keep spinning until this happens.

Depending on the casino at which you’re playing there may be an option for the impatient to buy straight into the bonus feature for 80x the stake.

There are plenty of slots themed on Greek gods so the appearance of a Roman god is welcome here; it’s an atmospheric outing into Roman mythology with two interesting features involved and an RTP of 95.81%