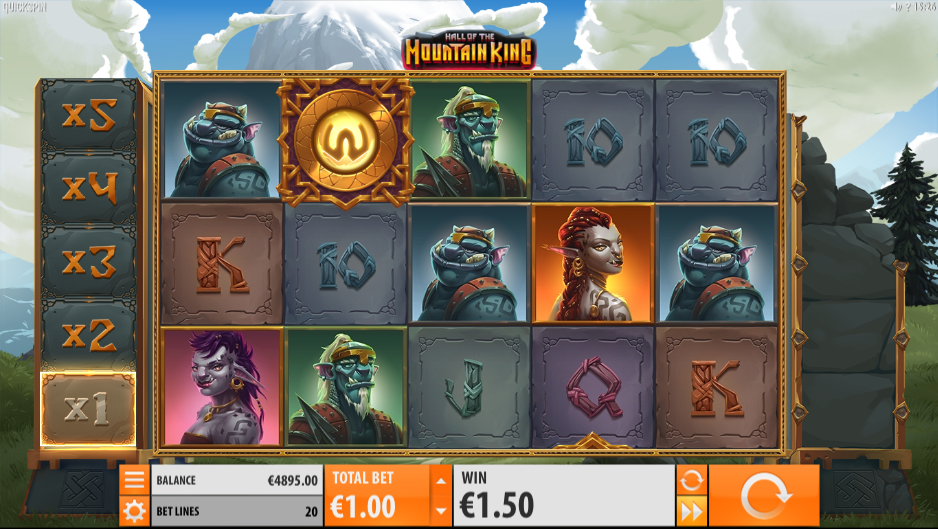 Classically educated online slots fans will surely recognise the title of this online slot as Edvard Grieg’s 1875 soundtrack to Henrik Ibsen’s play Peer Gynt but the subject is the same – trolls living in their subterranean mountain home and guarding large piles of treasure – read on to find out what’s going on.

Hall of the Mountain King is a five reel slot with three rows and twenty fixed paylines; it’s great to hear Grieg’s original score as the accompanying music while all the action takes place against a backdrop of lofty mountains, partially hidden in the clouds.

The five high value symbols are all troll characters from this story, each one equally as unattractive as the next; 10, J, Q, K and A make up the lower values.

The wild symbol is a gold ‘W’ which will replace all standard symbols to help form winning combos; each wild symbol in view will increment the meter on the left by 1x and the total will be applied to any wins on that spin.

The hammer is the bonus symbols which activates the main feature.

This is triggered by landing three of the bonus symbols anywhere on reels two, three and four and you’ll get to play a three stage feature which works like this:

The wild multiplier feature is available in stages one and two with a maximum multiplier of 15x.

Hall of the Mountain King is another slot to add to a long list of high quality Quickspin releases – this time it comes with top notch graphics, an inventive, three stage bonus feature and a stunning soundtrack to complement your gameplay. Very, very good.