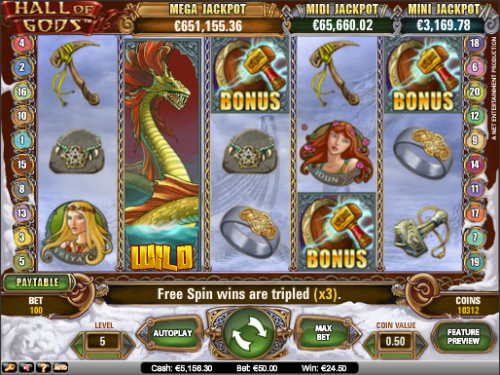 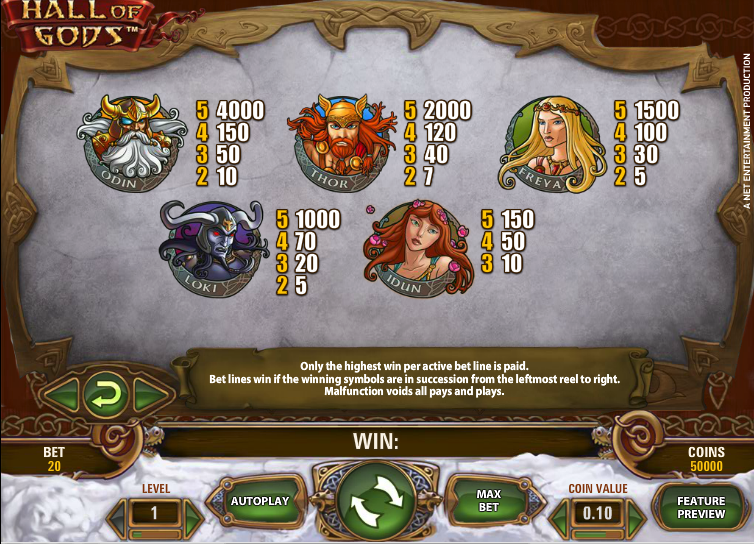 Hall Of Gods from Net Entertainment is currently one of the online slots in focus at the moment after the gigantic progressive jackpot win in Sweden.  €6.7 million was claimed with a Mega-Jackpot win so if you want to have a go at this machine and try to win some big money  it’s worth reading the following review.

Net Entertainment very rarely fail to provide a satisfying gaming experience and Hall Of Gods is no exception; the animations, graphics, gameplay and sound effects all combine to create a great game.

It’s a five reel and twenty payline slot and as the name suggests it’s based on Norse mythology. The background to the game is a longship and a giant serpent while the symbols are all related to the theme.  The lower value symbols are a chest of fruit, an axe, a necklace, Thor’s hammer and an ornate ring while the higher value symbols are the gods themselves – Idun, Loki, Freya, Thor and Odin.

The wild is the giant serpent, the scatter symbol is two birds silhouetted in front of a full moon and the bonus symbol is a hammer and shield.

If you land a winning combination using the wild ‘serpent’ symbol on reels two, three of four then that symbol expands to cover the whole reel, revealing the serpent in all it’s glory and giving you more chances to make combos.

This is where you can win the big money and the way to trigger the bonus game is to land three of the hammer and shield symbols on the reels.  You will then be whisked off to a screen where you have have to smash shields until you reveal three matching prizes.  The prizes are amounts of coins or a jackpot so choose carefully.

Hall Of Gods is well worth a diversion; it’s a fixed payline game so the minimum stake is €0.20 but you can spend up to €50.00 per spin if you so fancy.