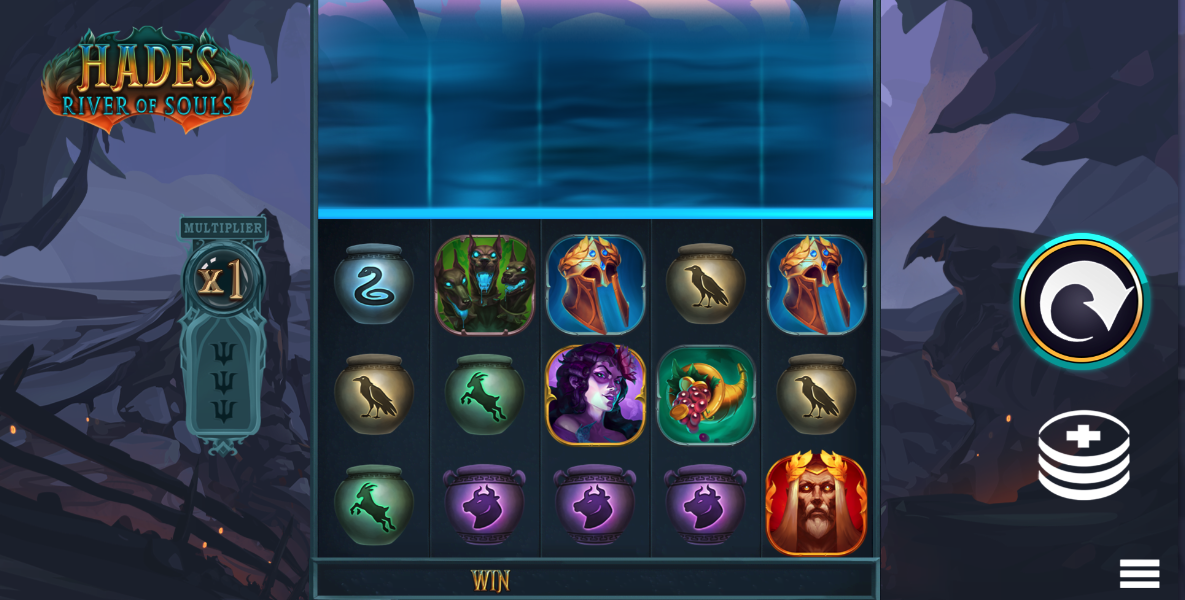 In Greek mythology Hades was both the god of the underworld and the underworld itself and they’re the twin themes of this online slot from Fantasma Games; it’s called Hades River Of Souls and it tempts players with avalanche symbols, wild multipliers and two clever bonus features.

Hades River Of Souls is a five reel slot with three rows and ten fixed paylines although wins will pay both ways to effectively double that number; the backdrop shows this underground world complete with the River Styx and a multiplier meter on the left hand side.

The high value symbols include Hades, Cerberus, the helmet and the horn; lower values are represented by a selection of coloured vases engraved with various animals. The golden ‘W’ is wild and it will replace all standard symbols to make winning matches; the special symbol are the Skull of Charon and the pitchfork thing.

Each symbol in a winning combo will disappear and be replaced by more falling in from above; new wins can then be formed to continue the process. As an extra feature each three wild symbols which fall down during an avalanche will increase the win multiplier by 1x as shown on the left hand side – this is the Wild Souls Multiplier.

This is triggered each time a Skull of Charon appears on the reels and after any avalanches it will disappear, taking between two and ten random symbols with it to trigger another avalanche.

Landing at least three of the pitchfork scatter symbols anywhere in view will award ten free spins which can be retriggered in the same manner; during this round the Wild Souls Multiplier will increase by 2x with each three wild symbols cllected during the avalanches.

There are loads of extra features squeezed into Hades River Of Souls and they complement a really atmospheric journey down into Greek myth and legend; trigger the free spins for the biggest wins and enjoy the avalanche feature!