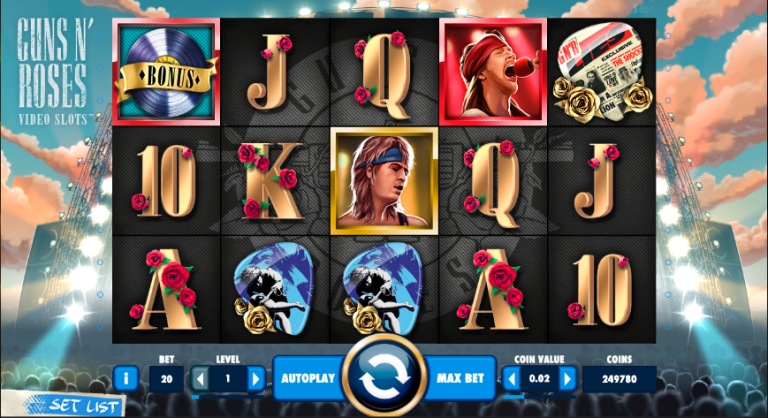 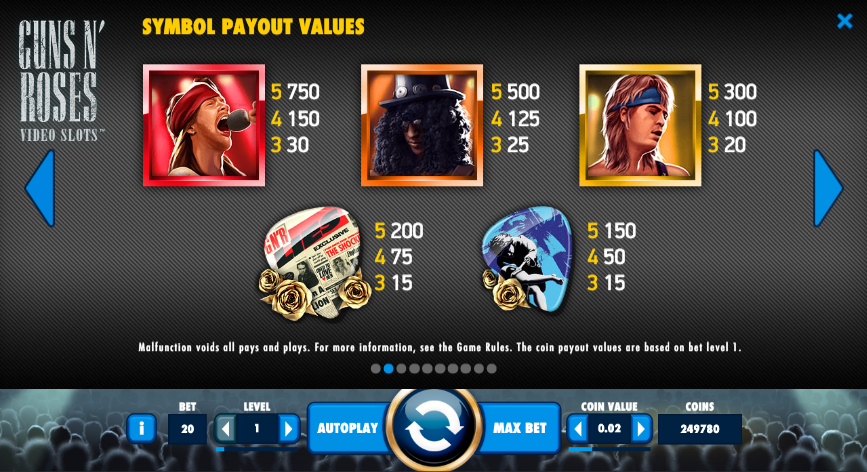 After almost a year of waiting, the Guns N’ Roses online slot is finally here and pretty impressive it is too; it’s developed by Net Entertainment, it looks amazing, it comes with a whole raft of bonus features and you can accompany your gameplay with a choice of five of the bands’ most famous songs.

Guns N’ Roses is a five reel slot with three rows and twenty fixed paylines and the first thing you should do is click the ‘Set List’ button in the bottom left hand corner to pick your tune or play all five. Now turn your attention to the reels and they are placed against a backdrop of huge floodlit stage in front of thousands of fans. Land a winning combo and those fans will bounce up and down in a very realistic way.

The five high value symbols are the band members – Axl Rose, Slash and Duff McKagan – along with two decorated plectrums; 10, J, Q, K and A are the rose-adorned lower values.

The Guns N’ Roses logo is wild, appears on all reels and will expand to fill all positions to help out with extra winning combos; the bonus record symbol appears on reels one, three and five and activates the main feature.

This is where most of the good stuff happens and it’s triggered by landing three of the bonus symbols on reels one, three and five. You now get to spin the bonus wheel to determine which of the following features are awarded: 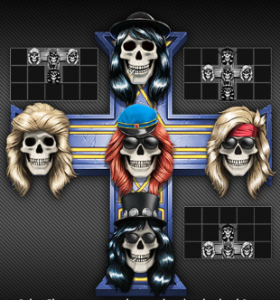 This is a feature which occurs in the base game and essentially it’s a big wild in the shape of a cross which can appear on the reels in just three possible places on the centre reel. It substitutes for all other symbols except the bonus icon.

This is a randomly activated feature which awards three free spins:

This is another randomly occurring feature after any win and you will see one of those symbols highlighted and a multiplier of between 4x and 10x applied to that win.

Guns N’ Roses has been well worth the wait and Net Ent have certainly delivered the goods in all areas; it looks good, sounds fantastic, plays crisply and has more bonus features than you can shake a drumstick at. It also has a nice high RTP of 96.98%.