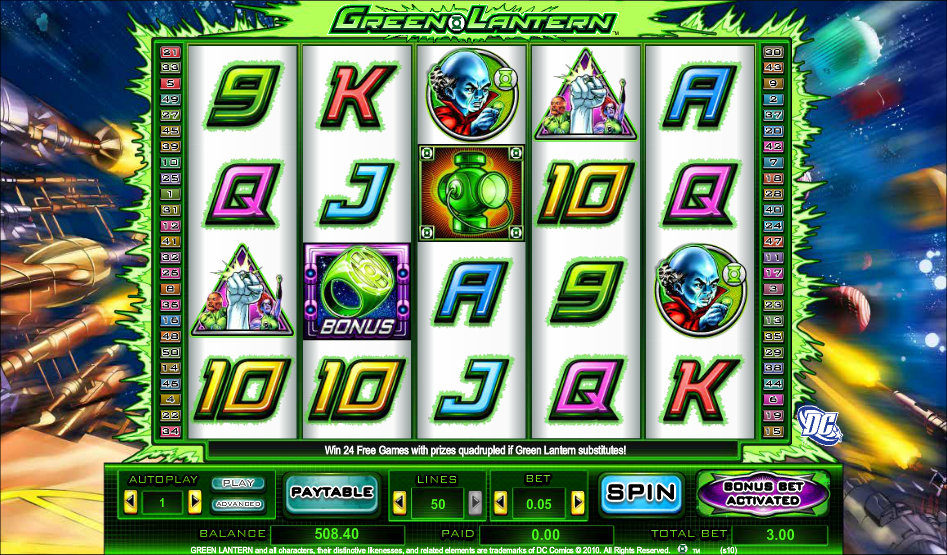 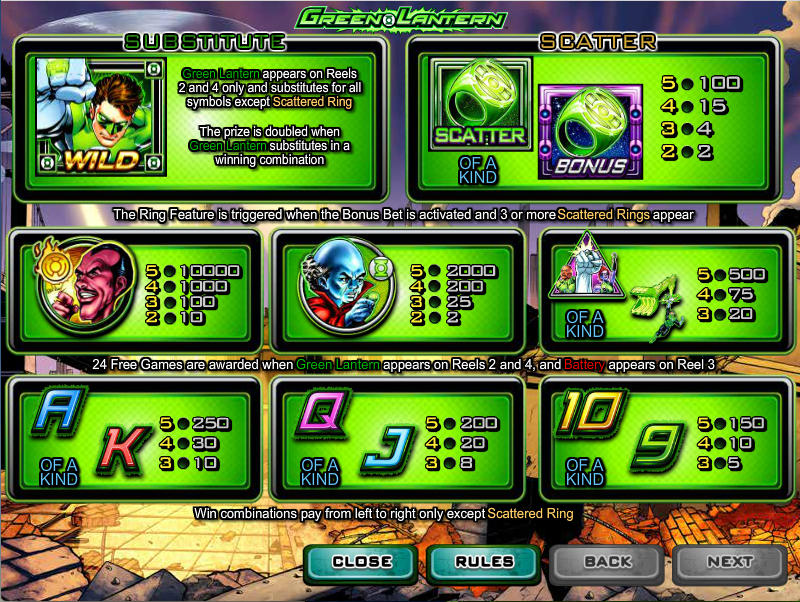 The Green lantern is perhaps one of the less well known of DC Comics’ superheroes; he’s had various character incarnations over the years but his special powers have always revolved around those provided by his special rings. The Green Lantern online slot was originally developed by NextGen Gaming (now Amaya Gaming) and it comes with a Bonus Bet option and two extra features.

Green Lantern is a five reel slot with four rows and up to fifty paylines; there’s a definite comic book feel to the design of this game and behind the reels there’s a scene of destruction lit by spotlights from hovering helicopters.

The high value symbols are as follows – Green Lantern’s enemies, Hector Hammond & Sinestro, a white fist, the Green Lantern himself and then 9, 10, J, Q, K and A as the lower values.

A close-up of the Green Lantern is the wild symbol, appearing only on reels two and four and doubling any combos he helps form; the glowing green ring is the scatter which activates one of the features (during Bonus Bet only) and there’s also a lantern which appears on reel three

Click the Bonus Bet button underneath the reels to activate this option; it costs an extra ten credits but it’s the only way to activate the Ring Feature. It also adds an extra multiplier to any wins.

This is activated during Bonus Bet and it’s triggered by landing three or more of the ring scatter symbols. You will now see a battle between Green Lantern and Sinestro – if your hero defeats Sinestro you will win up to 100x the total stake but the reward will be lower if Sinestro wins.

This is triggered by landing the Green Lantern on reels two and four plus the actual lantern (right) on reel three; you will receive an impressive 24 free spins with an extra spin aded each time the lantern appears again. Additionally all wins containing the Green Lantern will be multiplied by 4x.

We recommend using that Bonus Bet button – it may not alter the RTP to any significant degree but it will make things more exciting.

The Green Lantern slot is a little dated now but it’s got plenty to offer with extra bonus features games and optional extras. We like the appropriate comic book design and there’s an RTP of between 92.35% – 95.34%.