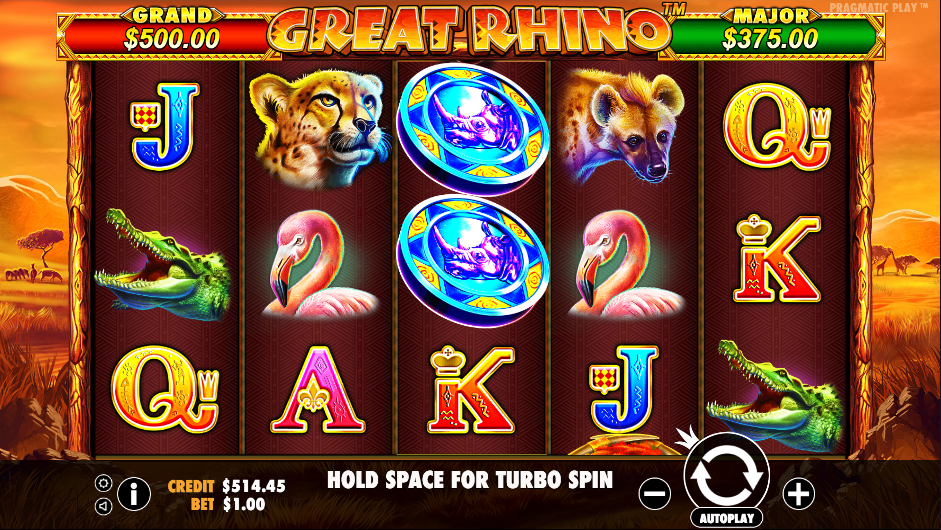 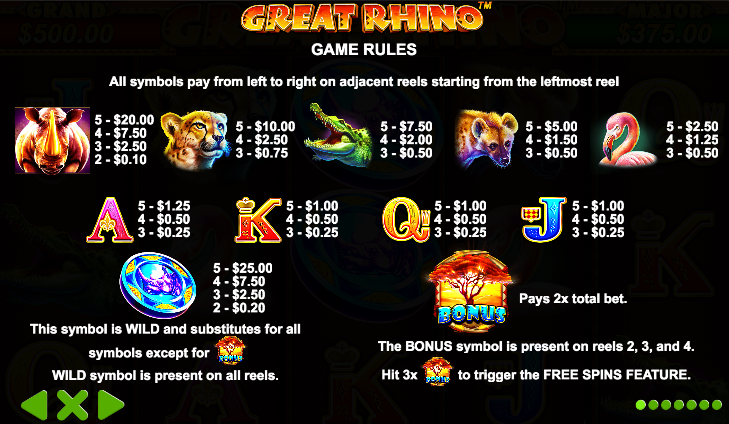 If a trip to the African savannahs sounds like your cup of tea but you can’t be bothered actually getting there then why not try an online slot themed on this fantastic location and it’s indigenous animals; here we bring you Great Rhino, a game from Pragmatic Play with a free spins round and two jackpot prizes.

Great Rhino is a five reel slot with three rows and twenty fixed paylines; those reels spin on a decorated wooden frame which floats in front of a scene featuring the sun setting on a scorched landscape across which roam various creatures.

The higher value symbols are all animals from this region including the rhino, a leopard, a crocodile, a hyena and a flamingo; J, Q, K and A are the lower values.

The wild is a blue disk displaying a rhino and it will replace all others to help form winning combos except for the baobab tree scatter symbols which appear on reels two, three and four.

This is triggered by landing at least two reels full of rhino symbols and those reels will now freeze in place for an initial three free respins; any further rhinos landing will freeze in place and award one more spin. Filling all positions with rhinos will end the round and award the Grand Jackpot prize while ending it with fourteen rhinos will award the Major Jackpot.

Trigger this by landing three baobab tree scatter symbols anywhere on reels two, three and four for an ten free spins. It’s not possible to win any more spins during this round but the rhino becomes an extra wild symbol to help you along the way.

If played any Pragmatic Play slots then you’ll be familiar with the gameplay of Great Rhino but it’s a solid game with some nicely drawn animals, some appropriately tribal sound effects and two jackpot prizes to aim for. There’s an RTP of 96.53%.