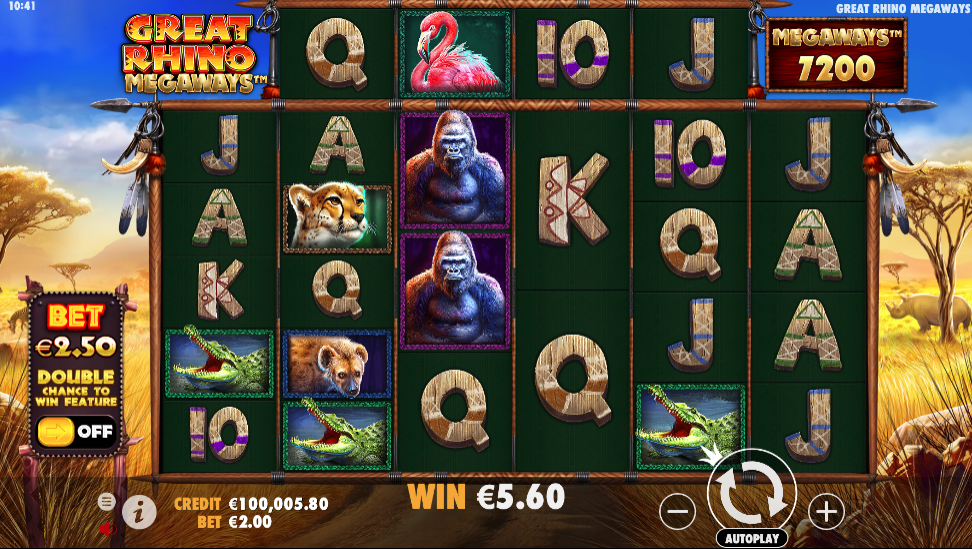 When five reels and twenty five paylines just aren’t enough you can always turn to an online slot with Megaways, Big Time Gaming’s gameplay mechanic which, in the case of Great Rhino Megaways, offers up to 200,704 ways to win. Read on to find out how this animal-themed game from Pragmatic Play works.

Great Rhino Megaways is a six reel slot with up to seven rows and a horizontal reel across the top; if your luck’s in and all reels display seven rows then that huge number of paylines becomes reality – the actual number is shown in the little box in the top right hand corner.

The five higher value symbols are the leopard, the gorilla, the crocodile, the hyena and the flamingo; 10, J, Q, K and A make up the lower values. The rhino is of course the wild symbol, it appear on reels two to five and the top row and it will replace all others except for the gold coin to make winning matches.

Each symbol in a winning combination will disappear and allow more to fall in from above – more combos can then be formed and the process continues until there are no more wins.

Landing at least three of the gold coin scatter symbols anywhere in view offer players the choice of one of the following options – there’s also a fourth option which awards a random number of spins and a random initial win multiplier.

The win multiplier will increase by 1x with each successful tumble and you can win five more spins by landing three coins on the top row during this round.

Clicking the button to the left of the reels will increase the stake by 20% but double the chance to land the feature during normal gameplay.

Great Rhino Megaways is a really enjoyable implementation of the Megaways payline structure – there’s nothing particularly fancy going on here but the Tumble feature, free spins and the chance to increase the bet all up to a good time.