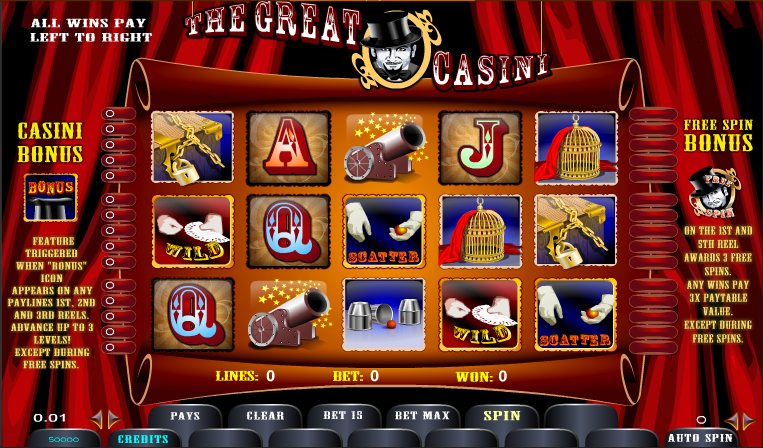 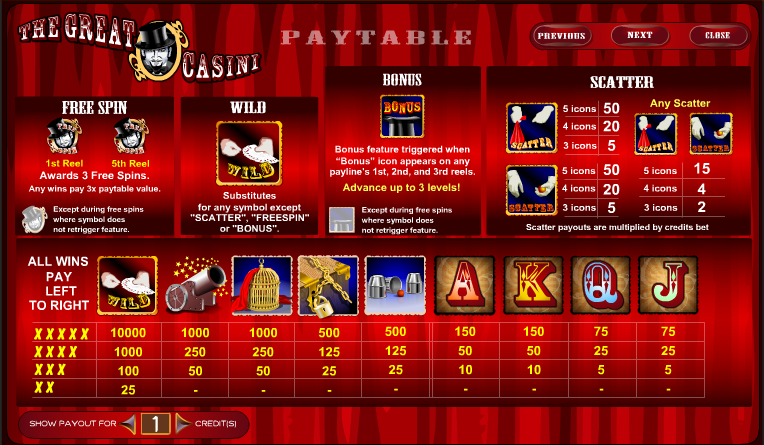 We like an online slot which takes us back to the days when entertainment was something completely different; in this case it’s all about magic and those traditional tricks which have gone by the wayside somewhat. This game is called The Great Casini, it’s from Amaya Gaming and it’s a throwback to the heyday of the superstar magician.

The Great Casini plays out over five reels and fifteen fixed paylines and the backdrop to this game is a large red curtain. The reels are set inside a red container while The Great Casino himself watches over proceeding from above.

The higher value symbols all represent traditional magic tricks and include a cup and ball, a Houdini-style padlock, a birdcage and a cannon. Lower values are the usual J, Q, K and A.

The wild symbol is a deck of cards, The Great Casini and the Bonus symbols activate separate features and there’s also a scatter which pays out for three or more in any position.

Landing The Great Casini on reels one and five will reward you with just three free spins. It’s a fairly brief mini-game but seems to occur fairly regularly and the extra good news is that any wins here will be worth 3x the base game value.

The free spins cannot be re-triggered during this feature.

This interesting game is triggered by landing three of the bonus symbols on a payline on reels one, two and three. You will then be taken to a screen displaying a young lady attached to a wooden wheel.

Your task is to press the ‘Throw’ button to launch two knives at the wheel; hitting two prizes will win you that amount and end the round but if you can hit Casini, you will advance to the next level where the prizes are higher. If you can find Casini again here you will move to the third level for even bigger payouts.

This slot is certainly a little dated now but it holds a certain appeal for it’s style of gameplay. The theme is a good one and there are some nice animations when you land a winning combo. Worth a brief look.