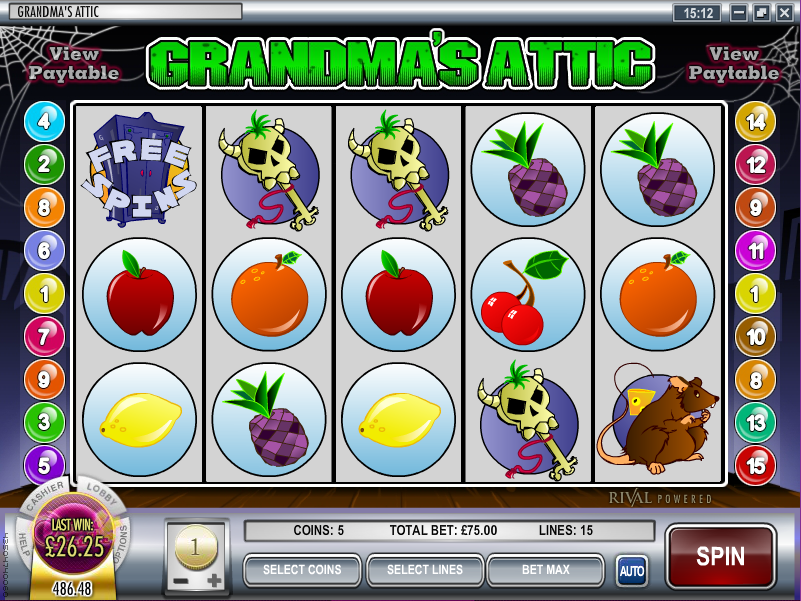 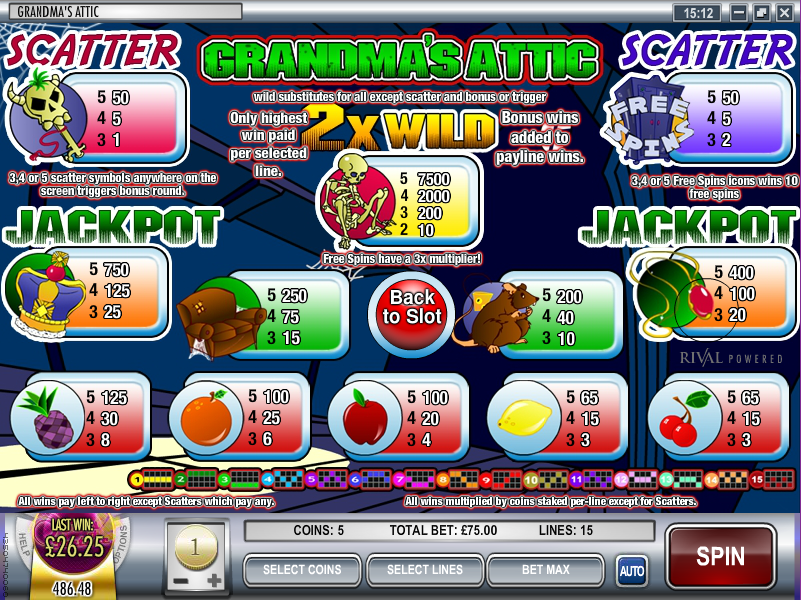 When visiting your grandparents do you ever marvel at the slightly dated decor and style of their house? If so then there’s almost certainly a whole new world of surprise and distaste waiting for you in the attic and that’s the premise of this online slot from Rival Gaming. It’s called Grandma’s Attic and if you watch the intro movie you’ll have a good idea of what’s waiting for the rotund child as he climbs the stairs into the loft.

Grandma’s Attic plays out over five reels and fifteen paylines and you have to look closely at the screen to see that the backdrop is that wooden-floored attic, overhung by large spiderwebs.

This is a graphically quite basic game and  and the four main symbols are a crown, a dusty settee, a big brown rat and a ruby necklace. There’s a selection of fruit for the minor values – cherries, lemons, apples, oranges and a purple pineapple.

Bonus symbols include a skeleton wild and two scatters – a skeleton key and a wardrobe – which trigger separate features.

The wardrobe scatter is also emblazoned with the words ‘Free Spins’ and by landing three or more anywhere in view you will earn yourself ten free spins. Any wins you land during this round will be subject to a 3x multiplier and it’s possible to re-trigger the spins by landing three more scatters.

Three or more skeleton key scatter symbols anywhere on the reels will kick this feature off and it’s not as impressive as some of Rival’s other games. Still, it’s an opportunity to win some money and you will be faced with an attic containing a number of chests.

All you have to do is pick a chest to reveal a prize; if you’re lucky the chest will also contain a key which will enable you to open another. If you don’t find an extra key the round is over.

If you’re a low roller you’ll be pleased to know that the features are triggered by scatter symbols which means you will have the same chance of reaching them playing with one payline of fifteen. Your prizes will be proportionately less.

We like the slightly creepy premise but the game doesn’t really match up twosome of Rival’s other games. There’s not much creativity in the bonus features and the graphics are a bit basic.