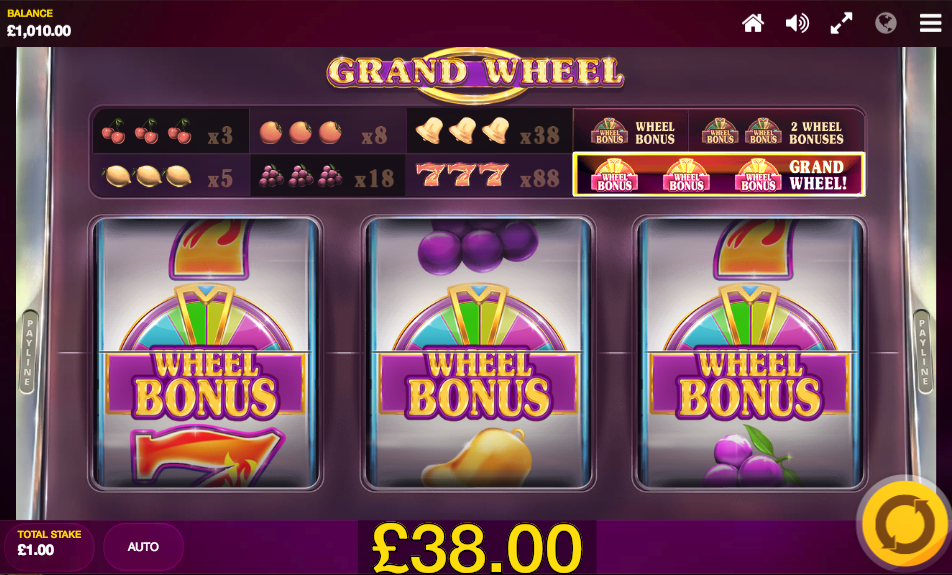 A mere three reels and the presence of fruity symbols suggests that this online slot machine could be described as getting back to basics  but there’s a bit more to it than that as we shall explain below; it’s called Grand Wheel and it’s developed by Red Tiger Gaming.

Grand Wheel is a three reel slot with just one payline and this machine is designed to look like a bricks and mortar model with metal edges and what could be a slot for the worlds biggest coins below.

There are just six standard symbols here, they are all of the fruity persuasion and they include cherries, oranges, bells, lemons, bunches of grapes and fiery red sevens.

There’s no wild symbol in Grand Wheel but there is the Wheel Bonus symbol which activates the main features.

The features in Grand Wheel all revolve around the Wheel Bonus symbols and your luck in landing them on the single payline; this is what you get for  achieving that:

Grand Wheel is a slot which mixes the traditional three reels and fruit symbols with a Wheel of Fortune feature that triggers regularly to award hefty multiplier wins; it’s smooth, classy and it comes with an RTP of 95.13%.