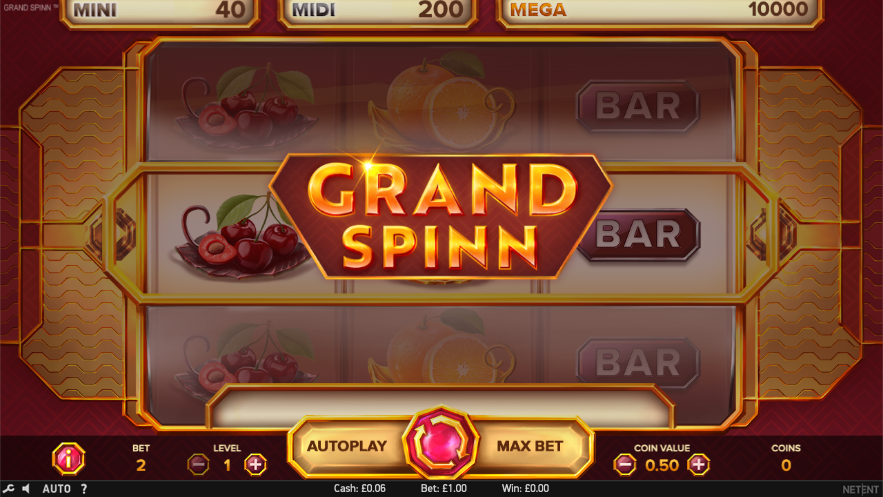 Direct from the creative minds at Net Entertainment is this online slot machine themed on an era of Art Deco, glamour and the luxury lifestyle; it’s called Grand Spinn and its three reels hide multiplier wilds, nudge features and jackpot wins.

Grand Sinn is a three reel slot with three rows and just the single payline; this game oozes class and sophistication with those reels spinning on a gold structure with the single payline marked out in yet more gold.

The symbols are familiar but beautifully drawn and include gold/red sevens, watermelons, oranges, plums, cherries and bars; there are also non-paying blank symbols.

The wild symbols may contain a multiplier value up to 8x and as always they’ll replace all others to help form winning combinations except for the three jackpot symbols.

This occurs each time you land a winning combination – after the payout if there is a matching symbol above the payline on reel one then the reel will nudge down and repeat the payout, this will continue until a different symbol appears there. The action will then move to reel two and three where this process is repeated.

If a golden arrow appears on one of those reels the stack of symbols will rotate in the other direction and the payouts will be repeated.

We’re often looking for something different from the bigger providers and Grand Spinn certainly is that – it looks and feels unfamiliar in a classy way and offers players two creative features which have the potential for some big wins.