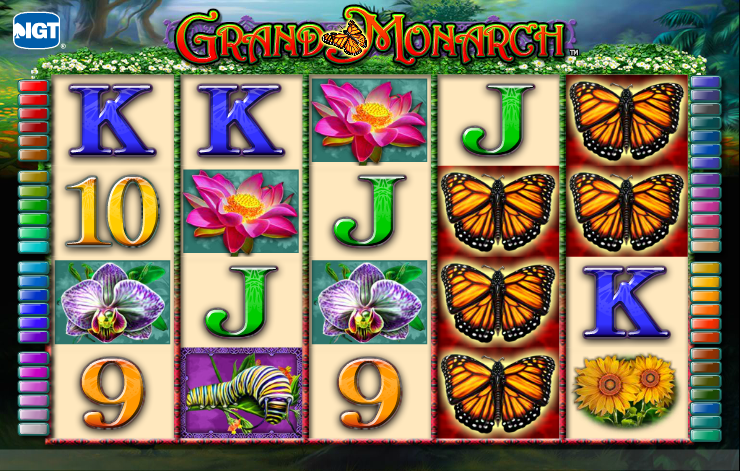 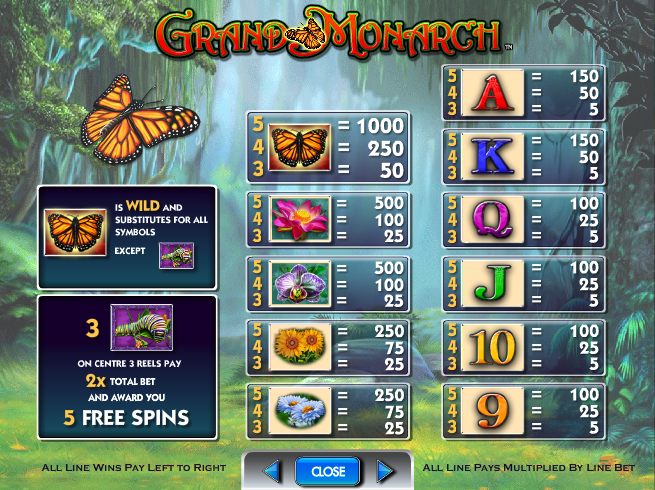 Grand Monarch is set against the backdrop of brightly coloured flora and fauna and it features five reels and twenty five paylines.  The reels are topped by small white flowers and in the background we can just see a steamy forest scene.
Not every online slot machine involves superheroes, aliens or sporting contests; every now and again a slot is released which celebrates nature in all it’s glory and that’s certainly the case with Grand Monarch, a brand new game from IGT.  The Grand Monarch is a butterfly located mainly in North America and it’s the colourful focus of this cheerful new slot.

The major symbols are a range of beautiful flowers including blue, yellow, purple and pink (we won’t try and guess the varieties) while the minor symbols are 9, 10, J, Q, K and A in different colours.

Special symbols are the large, orange Grand Monarch itself which represents the wild and a chrysalis which activates the bonus round.

Everyone likes a stacked wild somewhere on the reels and that’s what you get here; the Grand Monarch symbol appears stacked on the reels in the base game and offers more opportunities for winning combos.

Stacked symbols mean that they are placed on top of each other and in this fashion can cover entire reels.  In the free spins feature more stacked wilds appear on the reels.

Five free spins are available in this game and to get them you’ll need to land three of the chrysalis symbols on reels two, three and four.  This bonus is similar in style to other IGT slots in that during the round the colour of the symbols changes slightly to give the impression of a different game.

In this new round the symbols are placed against a blue background and the chrysalis is on red.  Three more chrysalises will earn you five more spins.

The theme of this slot means it’s a relaxing game to play and that goes for the soundtrack too; the graphics are top notch and this is a game well worth trying out.