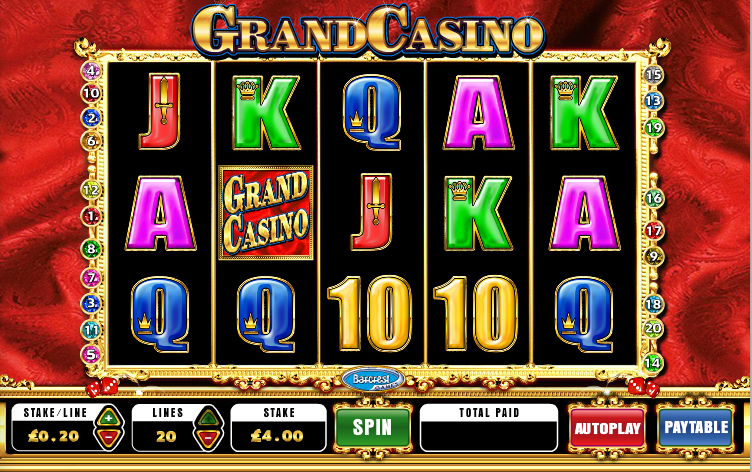 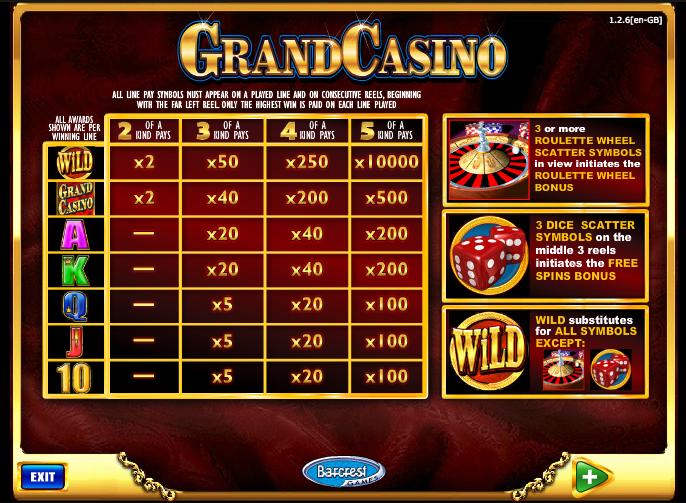 Barcrest is a name well known to players in the United Kingdom and if you’ve ever put some money into a fruit machine in a pub, you’ve probably played a Barcrest game. They also make online slots though, many of which are direct conversions from the physical machines and this one is Grand Casino. It’s a casino-themed release with two bonus features so read on to find out more.

Grand Casino plays out over five reels and twenty paylines and there’s a touch of luxury to this game; the backdrop to the reels is a lush red cushion and the reels themselves are set inside an ornate gold frame.

Each of the standard playing card symbols comes complete with the little Barcrest logo attached but there’s not much more to say about them; there’s only one more basic symbols and that’s the game’s Grand Casino logo.

The wild is a big gold ‘Wild’, the scatter symbol is a roulette wheel and there’s also a dice bonus symbol which activates the second feature.

That’s the end of the bonus unless you land on a roulette wheel symbol – then the prizes on view will be increased and the wheel will spin again.

To win the free spins you will need to land three of the dice symbols on the middle three reels. You will now get ten free spins plus an extra gift of 2x your stake.

It is possible to re-trigger the spins by landing three more sets of dice and a massive 999 are available for the luckiest players.

This is a pretty basic slot which does look a little dated but it’s rescued somewhat by the inclusion of two separate bonus features. The music can be a little grating.