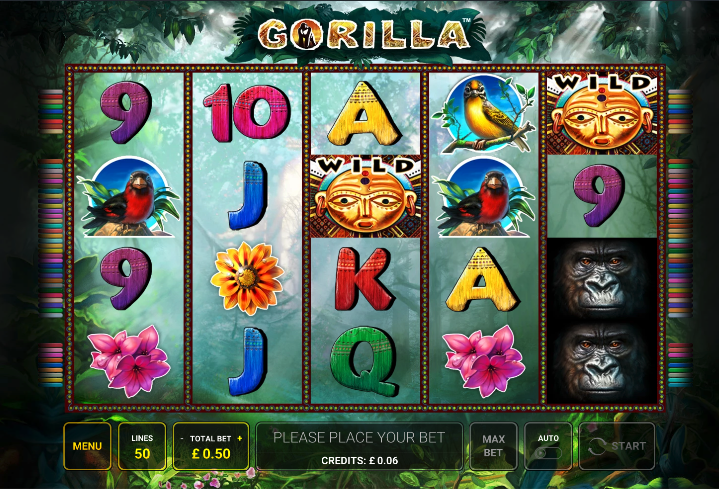 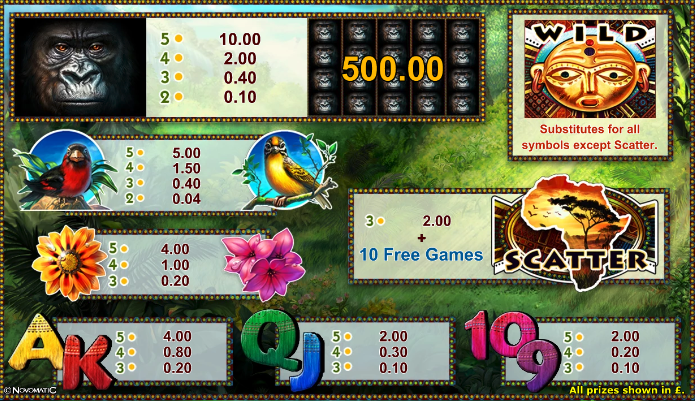 It’s time now to take a trip deep into the darkest African jungle to visit the home of the Gorilla courtesy of Novomatic/Greentube; this online slot machine brings with it a taste of the wild along with plenty of steamy free spins.

Gorilla is a five reel slot with four rows and up to fifty paylines; the first thing to complement about the design of this game is the soundtrack which features a barrage of jungle noises as you spin the reels. Past the symbols there’s a hazy, hot view of trees and undergrowth underneath the jungle canopy.

The high value symbols include the gorilla, two pretty tropical birds and two flowers; 9, 10, J, Q, K and A represent the lower values.

The tribal mask is wild and it will replace all other standard symbols to help form winning combinations; The map of Africa is the scatter symbol which is the key to the main feature.

This is triggered by landing three of the African map scatter symbols anywhere on reels one, two and three for which you will receive an initial ten free spins. It’s possible to trigger another five free spins just once by landing three more scatters during this round.

The big news about this round is that with every free spin an extra wild symbol is added to reels two, three, four and five so that by the end of the feature the chances of some bigger wins have increased substantially.

After each win just click the ‘Double’ button on the left for a shot at wagering your win in a double or nothing game.

We like the free spins and the general gameplay but the whole slot is enhanced by the jungle atmosphere and the sounds audible through the steamy haze; we like Gorilla!