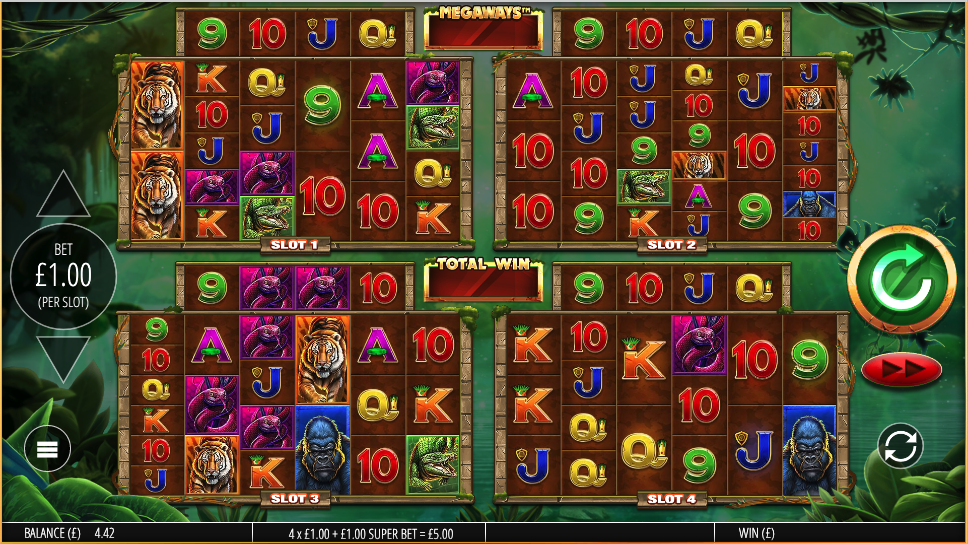 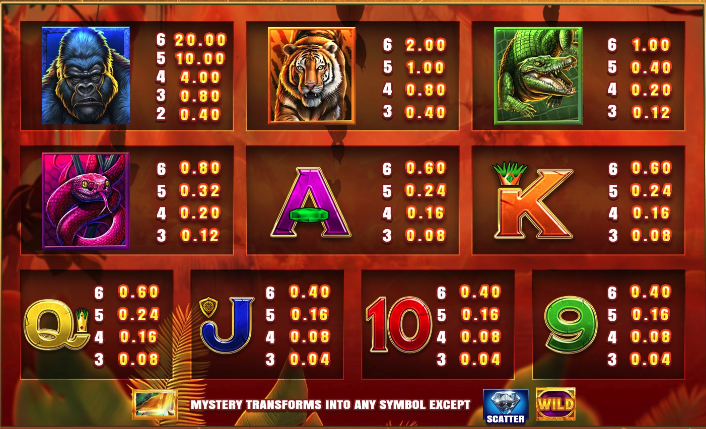 Gather round and listen to those jungle drums calling out to us and tempting us to play this online slot from Blueprint Gaming; it’s called Gorilla Gold Megaways and not only does it feature Big Time Gaming’s Megaways payline structure but it also multiplies those paylines with the Power 4 Play four reel setup.

Gorilla Gold Megaways is six reel slot with up to seven rows and the horizontal area at the top; in a normal Megaways slot that would add up to a 117,649 paylines but here we have four reels in play meaning a possible 470,596 ways to win.

The high value symbols include the gorilla, the tiger, the crocodile ands the snake; 9, 10, J, Q, K and A make up the lower values. The golden ‘Wild’ is wild and it will replace all symbols to help create winning combinations except for the diamond scatter.

Any symbols in a winning combination will disappear and be replaced by more falling in from above – new combos can then be formed and the process continues until there are no new wins.

The Mystery Symbol appears randomly and all instances will transform into matching symbols when it shows up.

Landing at least four of the diamond scatter symbols anywhere in view will award a spin of the wheel to determine the number and type of spins won:

The basic free spins takes place on one reel set and can be retriggered by landing three or four diamonds on the horizontal reel, awarding 5 or 10 extra free spins. Each cascade will increase the win multiplier by 1x with no limit.

The Super Spins also start on one reel set but collecting five, ten and then thirty Golden Monkeys will unlock the second, third and fourth reel sets respectively. Each unlock also awards five extra free spins. If you end up with less than 100x the Super Spin Bet you’ll receive another five spins.

If 117,649 paylines weren’t enough for you then Gorilla Gold Megaways is clearly the way to go; it’s got everything we like – cascading reels, free spins, increasing multipliers and a jungle feature. Note that the stake shown to the left of the reels is per slot and so needs to be multiplied by four for the real cost per spin.