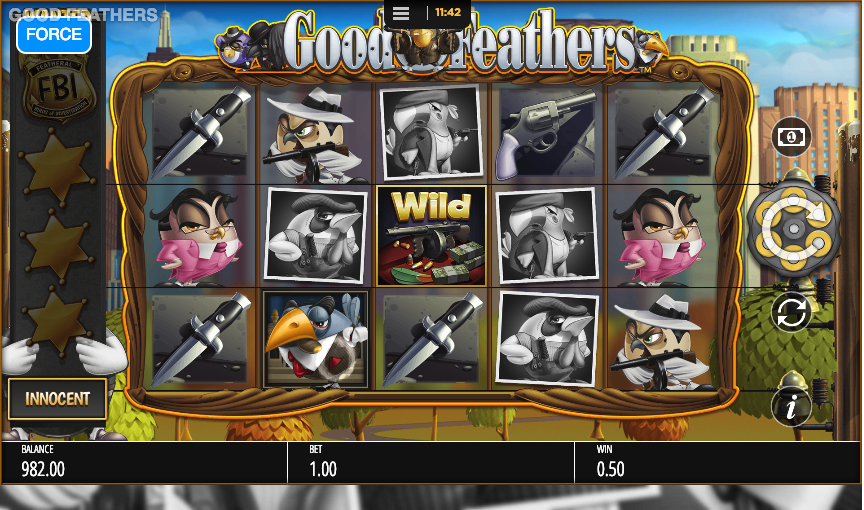 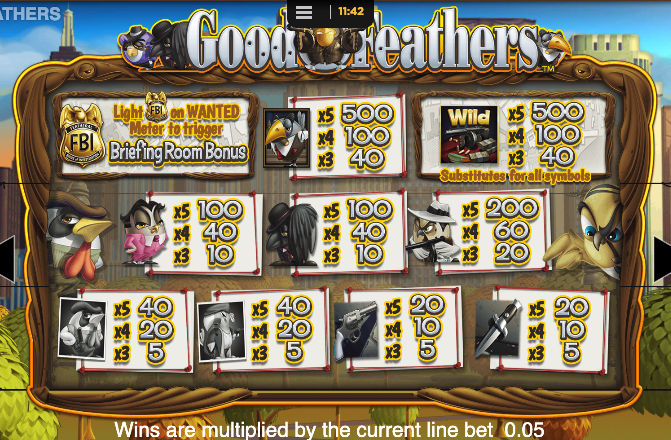 Chicago in the 1920s and 30s was a hotbed of criminal activity as prohibition opened the doors for vast amounts of alcohol smuggling; Good Feathers is an online slot from Blueprint Gaming in which birds replace humans as the ne’er-do-wells to keep the booze flowing.

Good Feathers is a five reel slot with three rows and twenty fixed paylines; those reels are suspended on telephone wires behind which is a view of the city beneath some ominous, rolling clouds.

Six feathered villains represent the higher value symbols and they are joined by a revolver and a dagger to complete the set.

The wild symbol is a Tommy Gun which will substitute for all others to help form winning combinations.

Good Feathers uses a ‘collapsing reels’ feature in which each winning will combo will disappear and be replaced by more symbols falling in from above – this process can continue until there are no more wins.

Each successive collapse will light up a star on the left of the reels and on the fourth one the Briefing Room Bonus will be triggered; now pick from one of the five options on display to reveal one of five features – as you can see from our gameplay video this choice can be gambled for a better one. They are listed below from worst to best:

The following features can occur on any non-winning spin:

Good Feathers is one of the most entertaining slots we’ve played for a while, combining collapsing reels, a whole flock of bonus features and some excellent graphics to create a superb game – don’t miss this one!