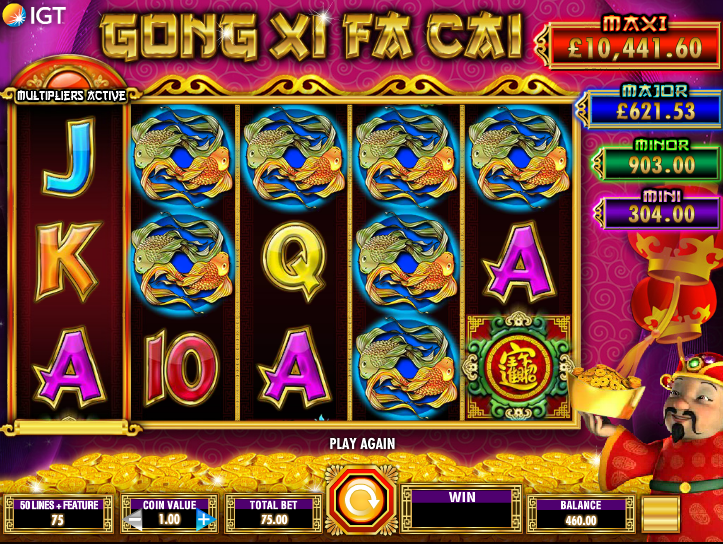 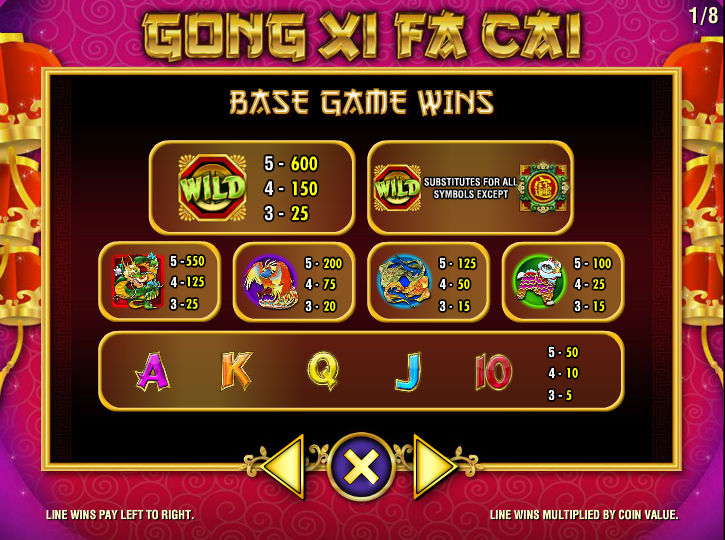 If you’ve missed the annual celebration which is Chinese New Year, don’t despair because you can relive the colour and sounds through this online slot from IGT; it’s called Gong Xi Fa Cai (which is the Chinese translation), it comes with free spins, a progressive jackpot and you can read all about it here.

Gong Xi Fa Cai is a five reel slot with three rows and fifty fixed paylines; there’s an animated cartoon design to this game which sees our gold ingot-toting character in the bottom right hand corner, next to a pile of gold coins and underneath the various jackpot totals.

The four higher value symbols are stylised animals including a dragon, a tiger, an eagle and some Koi carp; 10, J, Q, K and A make up the lower values.

The wild symbol is a big, colourful ‘Wild’ which substitutes for all others except the Chinese symbol scatter icon.

This only occurs on reel one and your win will be multiplied by 2x, 3x or 5x if a symbol displaying a multiplier appears as part of a winning combo. It occurs in the base game and free spins round.

Symbols on reels two, three, four and five can transform into one of the four high value icons before any base game spin.

This can be randomly triggered after any base game win which includes the multiplier feature; all you have to do now is pick the red envelopes until you’ve found three matching gems which will determine the jackpot win – Maxi, Major, Minor and Mini.

Gong Xi Fa Cai is a colourful, all-action slot which can be played at any time of the year, not just around the New Year; the features are well-designed, the progressive jackpot is tempting and it comes with an RTP ranging from 92.41% – 96.23%.