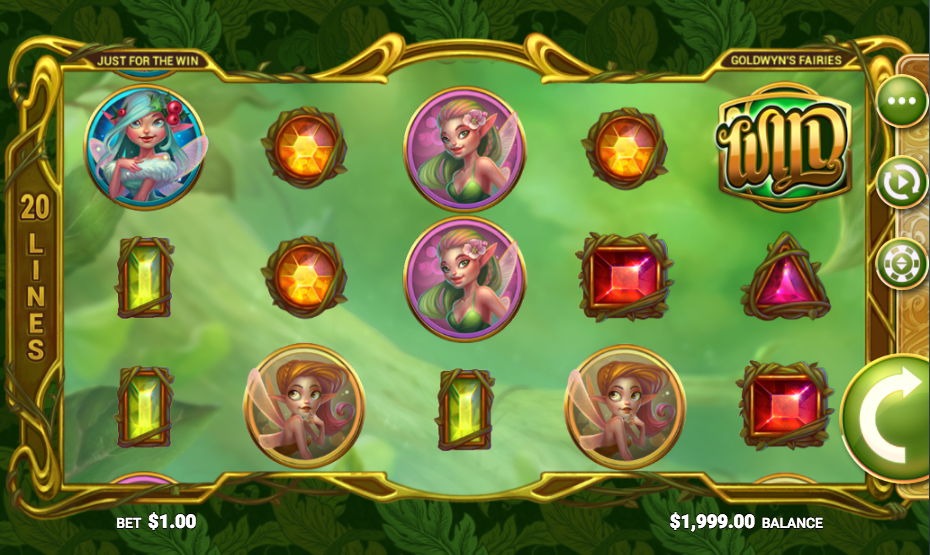 Fairy themed games are not an uncommon occurrence in the world of online slot machines but as long as they’re all of a high quality that doesn’t matter at all; Goldwyn’s Fairies is another to add to the list, it’s developed by Just For The Win and you can find out all about it here.

Goldwyn’s Fairies is a five reel slot with three rows and twenty fixed paylines; those reels spin within ornate golden reels behind which is the dense undergrowth of a fantasy forest.

The four higher value symbols are pretty fairies of varying colours while the lower values are represented by pink, red, orange and green gems.

There standard wild symbol is a big gold/ green ‘Wild’ which will substitute for all others to help form winning combos except for the Respin Wild, the Free Spin Wild and the Goldwyn’s Fairies scatter icon, all of which are described in detail below.

This is triggered whenever one of the Respin Wild symbols lands on reel three; any standard wilds in view now become ‘Returning Wilds’ and you will see a silver ring around that spot. The reels now respin and that position (or positions) will remain wild; in addition any Respin Wilds which now land anywhere will trigger one more spin. At the end you’ll also receive a Final Respin.

Trigger this by landing three of the Goldwyn’s Fairies scatter symbols anywhere on reels one, three and five; you will now receive nine free spins with the Returning Wilds feature active and an additional Final Respin. It’s not possible to trigger any more spins from within this round.

Goldwyn’s Fairies is a perfect example of how to to design a good-looking, captivating slot with some creative, potentially lucrative bonus features; it’s very enjoyable and definitely worth checking out.