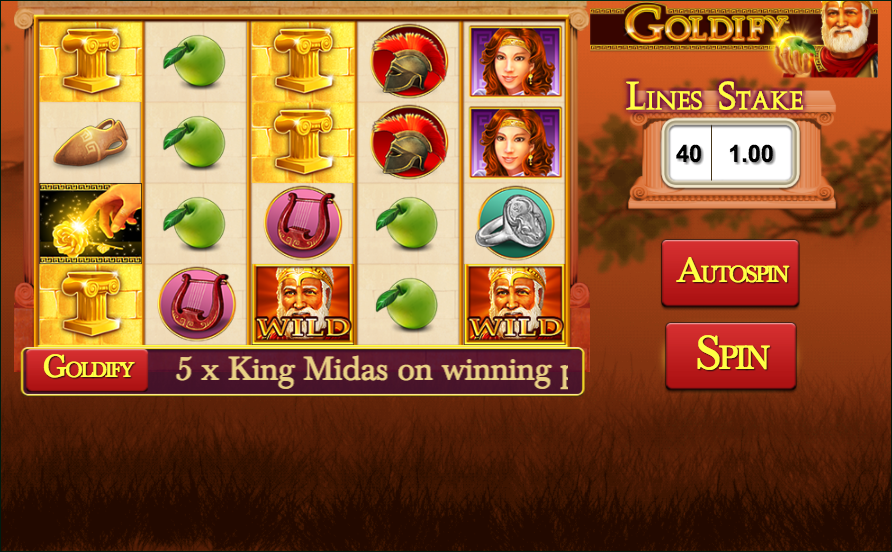 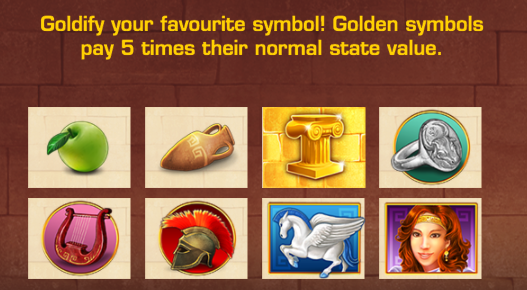 In Greek mythology King Midas was the character who could turn everything he touched into gold, giving us the term ‘Midas touch’ which is still in use today. He’s also the inspiration behind Goldify, an online slot from Probability/IGT which allows us to select one symbol per spin for an extra payout – read all about it below.

Goldify is a five reel slot with four rows and up to forty paylines; the design of the game looks a little odd when played on a desktop machine (as you can see from the screenshot above) but this is a port from a mobile device hence the quirky setup.

The symbols are all related to the theme and include apples, amphorae, columns, a silver ring, a harp, a helmet, Pegasus and a woman.

Midas himself is wild and he will substitute for all others to form a winning combo except for the gold rose scatter.

One of the eight high value symbols is always marked as gold and this means any winning combo it forms is worth 5x their normal prize; you can change this symbol at any time by clicking the ‘Goldify’ button below the reels.

This is triggered by landing three, four or five of the golden rose scatter symbols anywhere in view for which you will receive between 15 and 100 free spins. Each triggering symbol will award one ‘Goldified’ icon during this round, each paying 5x it’s standard value for a winning combo.

Goldify is a quite a basic game but of interest to us is the ability to change the variance of the game using the Midas Touch feature – if you want more smaller wins go for the low value symbols and vice versa. Anyway it’s worth checking out.