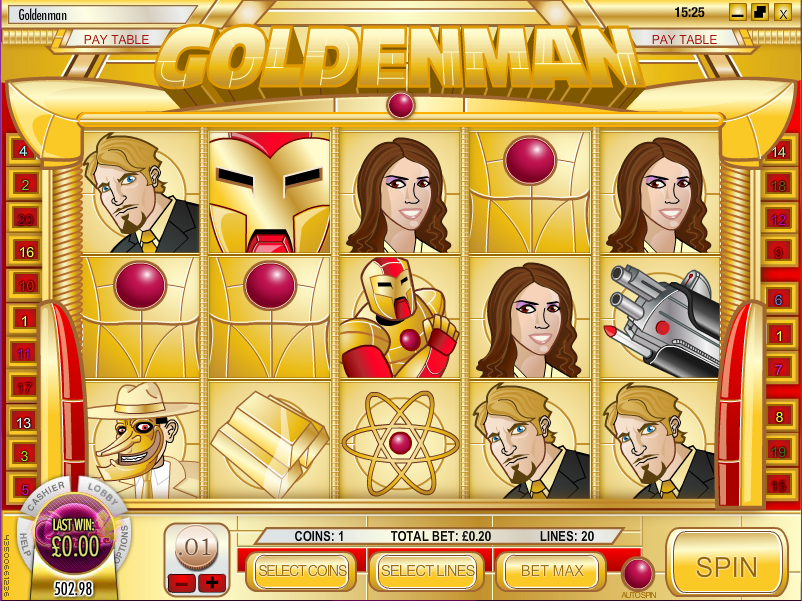 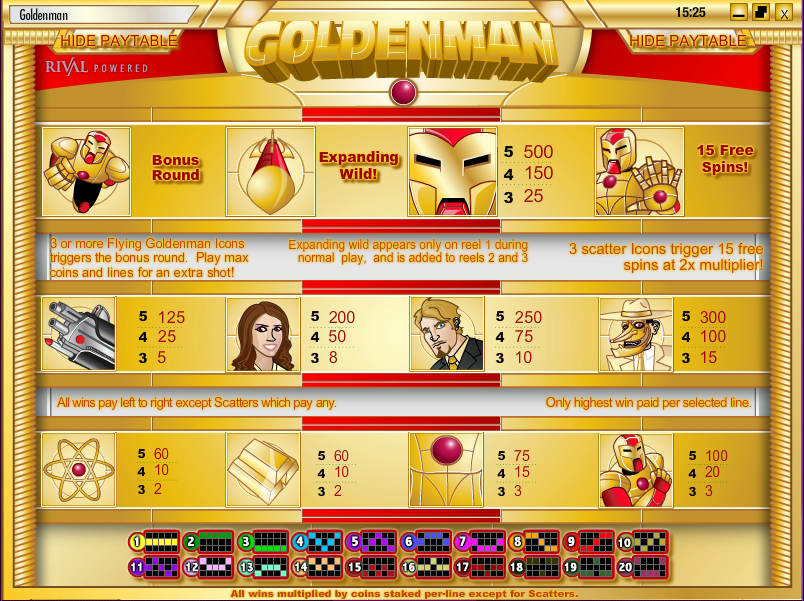 If you’re a fan of Marvel slots then you’ve almost certainly checked out one of the Iron Man games at some point or other. That being the case, have you ever thought that what Iron Man needs is some sort of upgrade? Maybe iron isn’t really good enough and something more expensive is required? In that case step forward Goldenman – he looks exactly like Iron Man but everything is made out of gold; that’s the premise of this superhero-themed game from Rival Gaming so read on to find out more.

Goldenman is a five reel and twenty payline slot and everything about this game – the reels, the surroundings, the buttons – is gold. Nothing wrong with that as long as some of it makes it our way.

Bonus symbols include a rocket wild and two scatters – flying Goldenman and ‘palm raised’ Goldenman – each of which have their own bonus game. The wild symbol expands on reel one in the base game.

Fifteen free spins can be yours when playing this game by landing three or more of the ‘palm-raised’ Goldenman scatter symbols anywhere on the reels. The wild symbol expands on reels one, two and three during these spins.

It’s a pretty basic round but there’s a 3x multiplier for any wins you land during this round. It’s not possible to re-trigger by landing three more scatters.

Fool’s Gold is your enemy and you must face him in this mini-game which is triggered by landing three or more of the flying Goldenman scatters anywhere in view. You will now get three shots to destroy some of the approaching fighter planes, each of which is worth a prize. Playing with maximum coins and lines will give you an extra shot.

If you can afford it, play with all ten coins and twenty paylines so that you’ll get the extra shot when you trigger the Fool’s Gold bonus.

This is not a bad game really but if you want something similar but better, any of the Iron Man slots is probably a wiser choice. Play this if you want to tick it off your list but don’t linger.