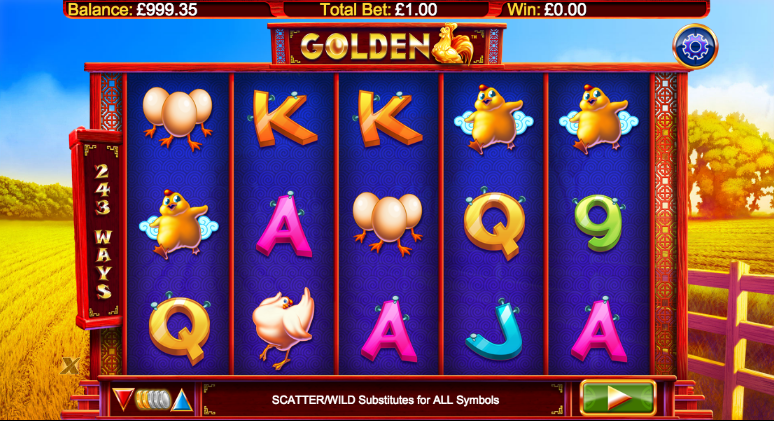 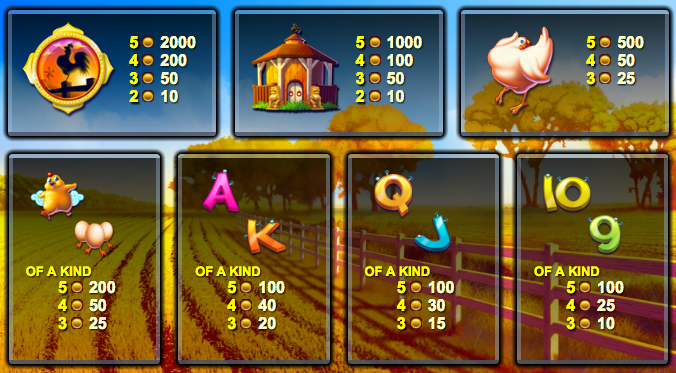 Farming has always been an unlikely but popular theme for online slot machines and we frequently get to play games featuring various livestock; the good news then it that Nextgen Gaming have developed one more – it’s called Golden and you can read all about it here.

Golden is a five reel slot with three rows and 243 ways to win – the standard payline structure is replaced by one in which wins can be formed as long as there are matching symbols in adjacent reels starting from the left hand side.

There are five theme-related symbols including the silhouetted rooster, the hen house, the chicken, the chick and a trio of eggs (with legs protruding from the bottom); 9, 10, J, Q, K and A make up the lower values.

The posing brown chicken is wild, he appears only on reels two, three and four and will replace all others in a winning combo including the scatter symbol.

This is triggered by landing three of the scatter/wild symbols anywhere on reels two, three and four; you will now receive ten free spins and during this round the Golden Rooster appears – this symbol acts as both a wild and a scatter and substitutes for all others.

It’s possible to retrigger more spins by landing three of the Golden Rooster scatters during this round and as a little extra gift, the value of any five symbol combos will be multiplied by five.

Golden is a nice looking slot with some high quality graphics; perhaps it lacks a little je ne sais quoi but it’s worth checking out if you want to complete your farmyard collection and it comes with a high RTP of 97.22%.