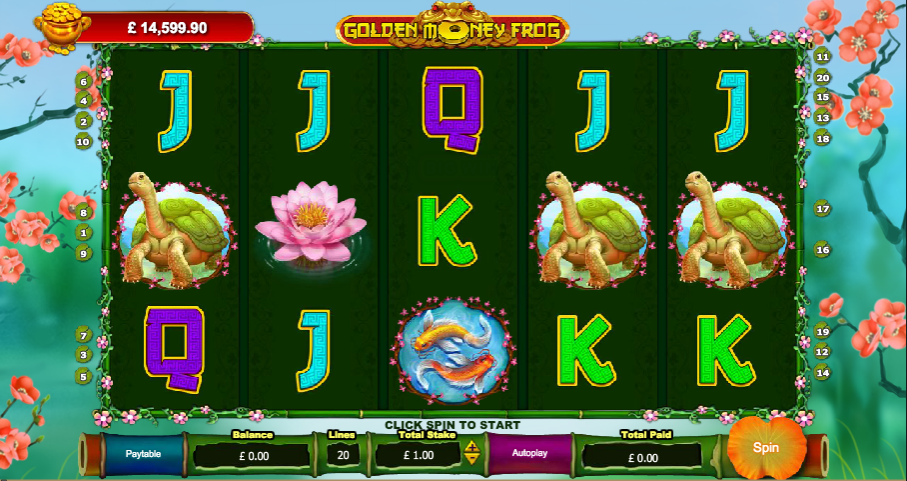 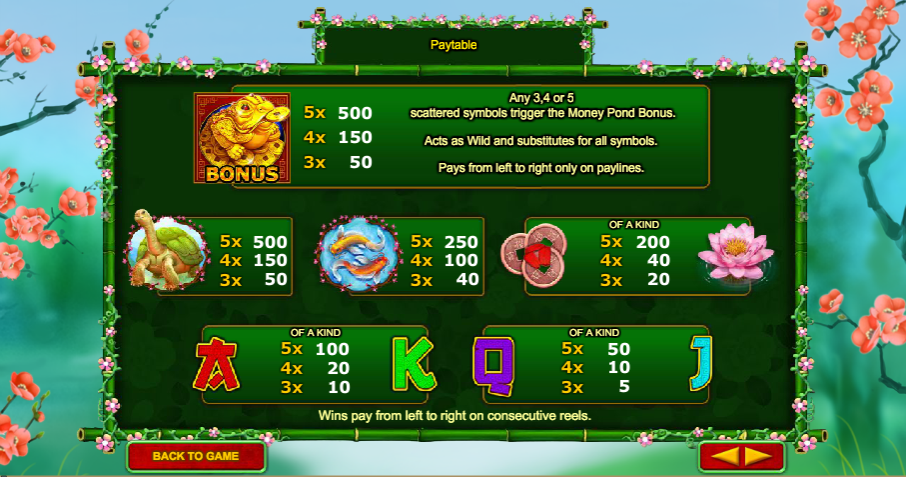 There’s a never-ending production line of oriental-themed online slots from various developers but there’s always room for more as long as they’re of a good quality; Sigma Gaming have a few under their belt already but Golden Money Frog is another to add to the list. It includes various bonus features and tasty progressive jackpot if you like that sort of thing.

Golden Money Frog is a five reel slot with three rows and twenty fixed paylines; there’s some distinctly Chinese music to accompany your gameplay and the flowery reels sit against a backdrop of blossoms and a hazy view into the distance.

There are four high value symbols including the tortoise, a pair of Koi, several Chinese dollars and a Lotus blossom; J, Q, K and A make up the lower values.

There’s a gold wild symbol in this game and there’s a scatter symbol represented by the golden frog; there’s also a gold overlay symbol which is necessary for one of the bonus rounds.

This is randomly awarded on a base game spin by the Golden Frog and it will increase the number of paylines in use from 20 to 30, 40 or 50. New wins will be paid out and then the paylines will revert to 20 again.

Trigger this by landing three of the Golden Frog scatter symbols anywhere in view and you will be taken to a screen displaying a pond with lots of lily pads. You must click the ‘Jump’ button to start the frog’s journey across the pads, picking up multipliers as you go; if he lands in the water the game is over but reaching the other side will award the biggest prize.

This is triggered by landing three of the wild symbol anywhere in view and you will be whisked to the Jackpot Wheel which you must spin for a chance to win the following prizes:

Golden Money Frog is graphically a bit basic but it comes with enough bonus features to make it an interesting distraction; the progressive jackpot helps make things a little more exciting.