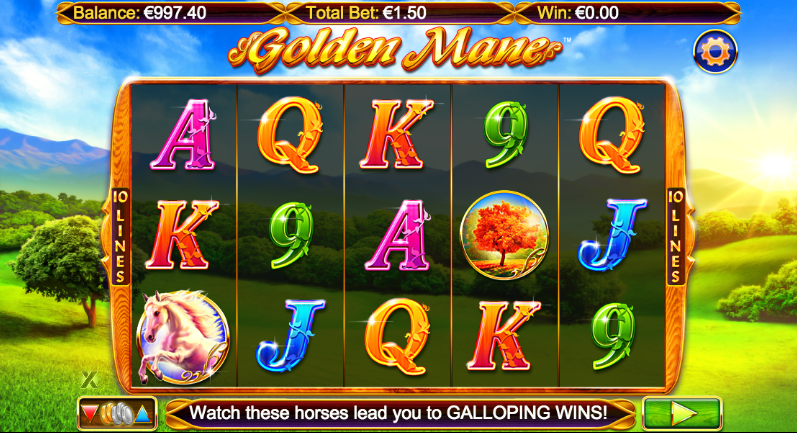 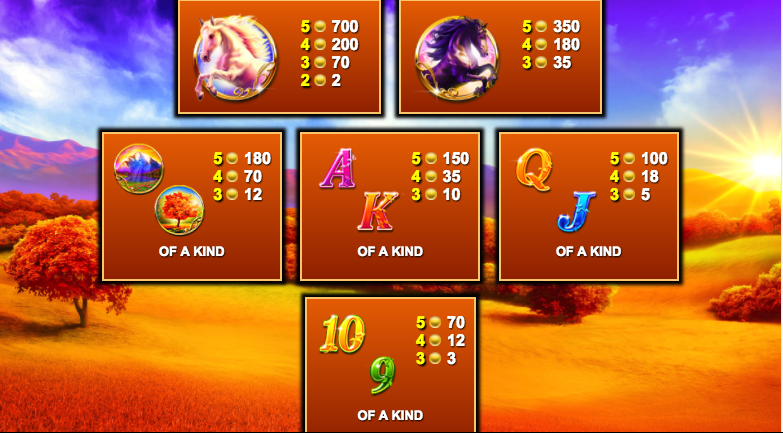 There’s a touch of fantasy about this online slot machine from NextGen Gaming but really it’s all about horses roaming in sun-drenched meadows; it’s called Golden Mane and you can find out how it all works below.

Golden Mane is a five reel slot with three rows and ten fixed paylines; those reels spin within a brushed wood frame which looks as though it could have been stolen from the walls of a posh golf club; the backdrop consists of a grassy landscape stretching into the distance where mountains rear up towards the cloudy blue sky.

The higher value symbols include a white horse, a black horse, a mountain and a tree; 9, 10, J, Q,  and A make up the lower values.

The wild symbol is the golden maned horse and he will substitute for all others to help form winning combos except for the silver horseshoe bonus icon.

This is activated randomly on any base game spin and extra scatter symbols will be added to reels two, three and four making it easier to trigger the main feature.

This is triggered by landing two or three silver horseshoe scatter symbols anywhere on reels two, three and four and you will receive either two or six free spins respectively. On the first four spins a new wild symbol replaces an existing symbol to help out with wins as follows:

The extra good news is that more spins can be triggered by landing more silver horseshoes during this round.

Golden Mane has a slightly retro feel to it which may or may not be intentional but it’s a very playable slot with two interesting bonus features and a relaxing theme – it comes with an RTP of 96.96%.