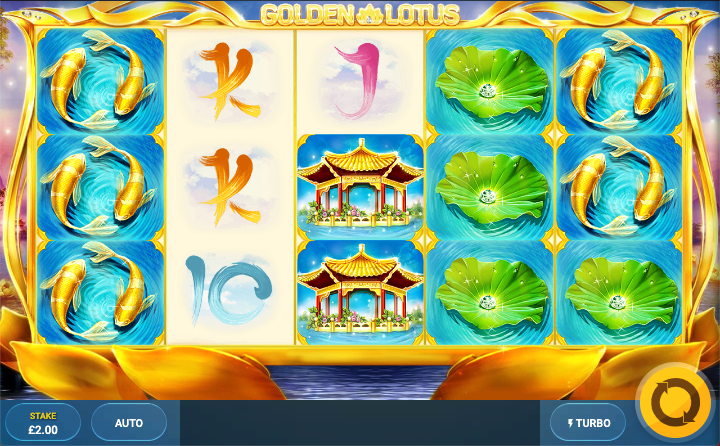 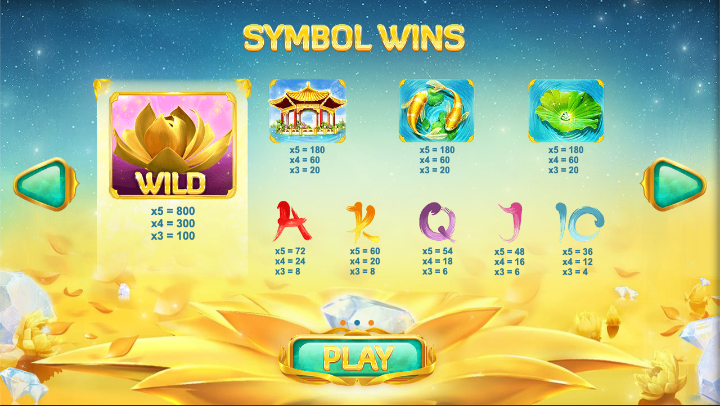 There’s no shortage of online slot themed on the mystical and inscrutable orient and Red Tiger Gaming are one of the most prolific developers of games occupying this genre; Golden Lotus is one more to add to the list and it offers players free spins and locked wild symbols.

Golden Lotus is a five reel slot with three rows and twenty fixed paylines; there’s a playful Chinese soundtrack to the gameplay which takes place on elaborate golden reels pitched against a backdrop of water and the setting sun.

The golden pagoda, the twin Koi and the lily pad are the high value symbols while 10, J, Q, K and A represent the lower values.

The golden lotus is wild and it will replace all other standard symbols to help form winning combos (we’ll tell you about its locking abilities shortly); the girl with the umbrella is the bonus symbol.

Every time a wild symbol lands on the reels it will animate slightly and lock in place for a maximum of ten subsequent spins; the magic petals which drop onto the reels increase the number of spins for which the wild symbols are locked.

This is triggered by landing at least three of the free spins symbols anywhere in view and the girl with the umbrella will now twirl it to determine the number of spins awarded. Any bonus symbols landing during this round will award one extra spin and and wild symbols appearing will remain locked in place until the round ends.

Red Tiger slots may appear to be a bit similar to each other but as long as they’re enjoyable then that’s Ok – Golden Lotus is a stylish and enjoyable outing with a clever wild feature and some classy looks.