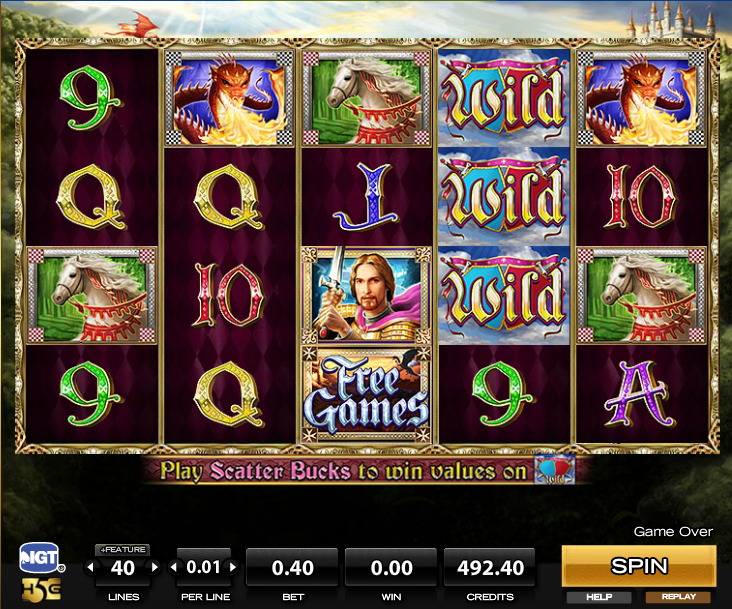 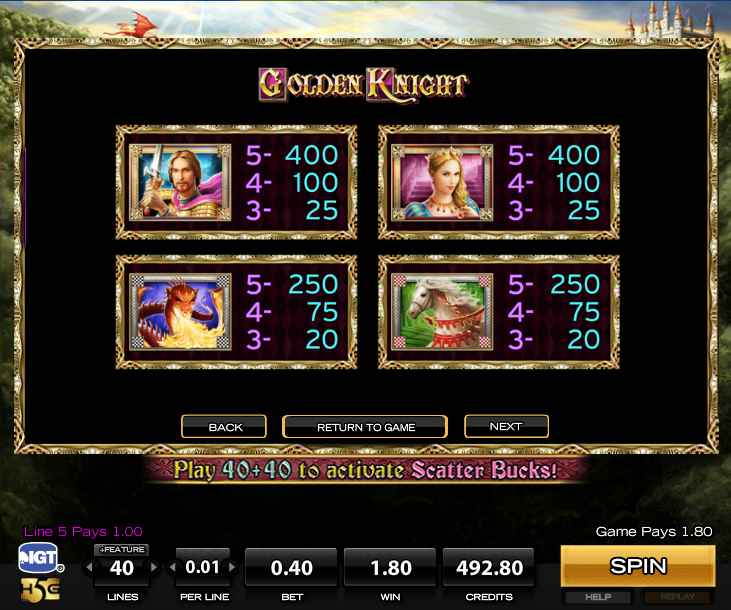 Trips to the Middle Ages are a familiar occurrence for fans of online slots machines – swords, horses, maidens in distress, it all makes for a good theme. IGT’s Golden Knight is an addition to that genre and not only does it include a free spins round, it also contains IGT’s Scatter Bucks feature which enables players to pay a little more for enhanced rewards.

Golden Knight is a five reel slot with four rows and up to forty paylines; the reels are framed by patterned gold and they sit in front if a backdrop containing forest, castles and dragons.

There are four high value symbols including the Golden Knight himself, the princess, the dragon and a trusty steed; 9, 10, J, Q, K and A make up the lower values.

The wild symbol is a gold ‘Wild’ set against a blue and red standard and the scatter is the Free Games icon which activates the main feature. The wild can appear stacked on the reels in both standard gameplay and with Scatter Bucks activated.

If you are playing with all forty paylines active then you will also have the Scatter Bucks feature activated. It’s an interesting added extra which places credit values on some of the wild symbols in mostly increasing value from left to right:

If any of these symbols appear you also win the credit amount displayed on the wild symbol whether or not they are part of a winning combo.

The Free Spins icon appears on on reels two, three and four but if you land three at once you’ll earn seven free spins. It’s very straightforward, there is no extra multiplier but you can earn more free spins (up to a maximum of 98) by landing more scatter symbols.

We like the Scatter Buck feature so why not spend a bit extra and activate it?

Golden Knight looks a little dated now but it plays smoothly and offers a couple of extra feature to get one’s teeth into. It comes with an RTP of 95.00%.