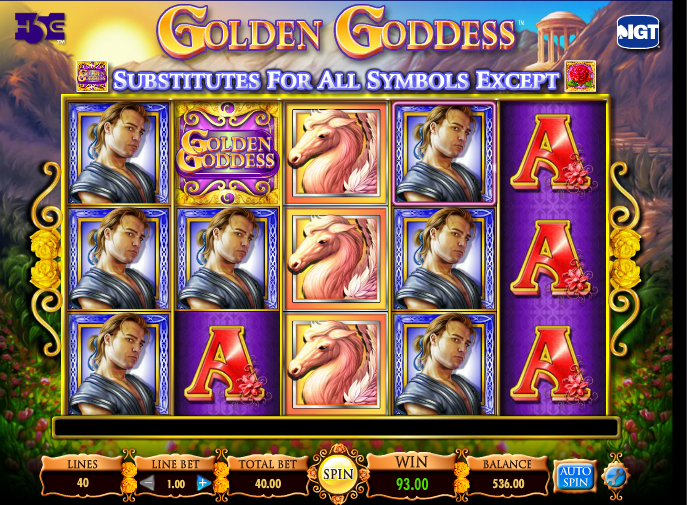 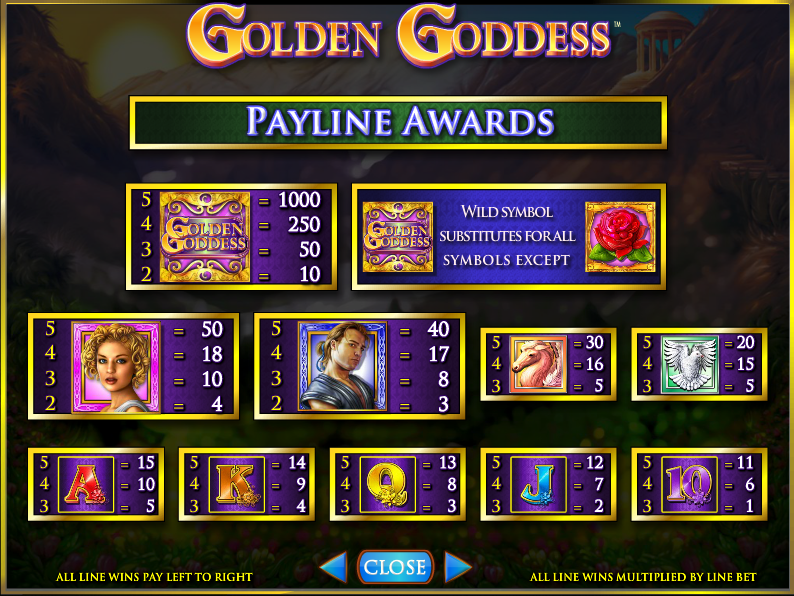 Some online slot machines we come across evoke certain times and places and that’s certainly the case with this brand new game from IGT; Golden Goddess has a distinctly Greek feel to it and that Hellenic suspicion is confirmed by the game’s background.  Mountains stretch away into the sun-soaked distance and there’s a temple just visible behind the shoulder of the hill in the top right hand corner.

Golden Goddess is a five reel and forty payline slot featuring a fictional goddess and her beau; there’s no real narrative to the game as such but it’s clearly a romantic tale set against the backdrop of ancient Greece.

Special symbols are a ‘Golden Goddess’ wild  and a red rose bonus which activates the free spins round.

The first thing you’ll notice when you play this slot is that the reels contain loads of stacked symbols; these are symbols which are placed on top of each other which means that payouts can be significant of you can land several of these side by side.

It’s quite possible to land three full reels of the same symbol next to each other (forming a 3 x 3 pattern of symbols) and when you do it will transform into one giant symbol while also paying out a handsome prize.

Seven free spins are up for grabs in Golden Goddess and you can win them by landing nine of the red rose symbols on reels two, three and four (i.e. covering all spots on those reels).

You being the round by picking one of the roses and the symbol revealed will be the one that is stacked for the duration of the free spins round.

This is a nice-looking slot with a relaxing soundtrack and some clever bonus features which should keep you playing.  It’s been pretty profitable for us and it’s currently one of our favourites.