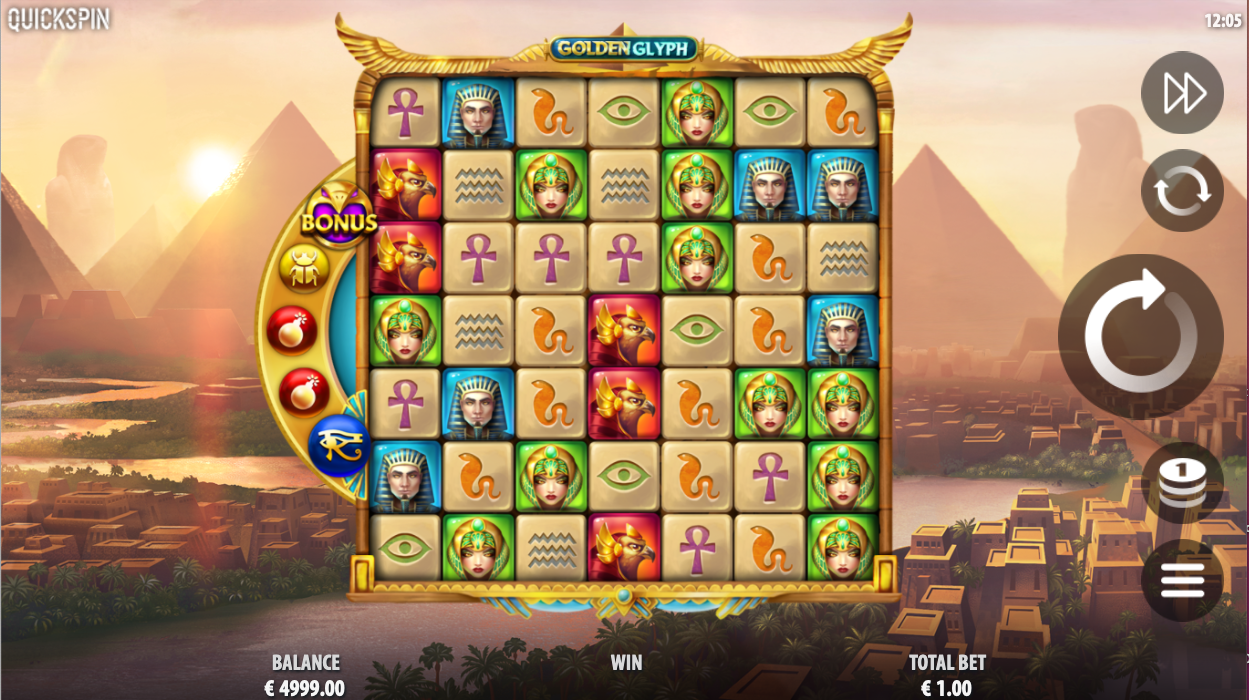 An Egyptian theme, tumbling reels and plenty of bonus features should be the recipe for a top drawer online slot machine and that’s what we have here in the shape of Golden Glyph; it’s developed by Quickspin Gaming and you can find out how it all works below.

Golden Glyph plays out on a 7×7 grid and the aim of the game is to create clusters of five matching symbols horizontally and/or vertically; symbols in winning combos will disappear and be replaced by more falling in from above and new matches may be formed in this manner. Behind the reel set is a magnificent view of an Egyptian city with huge pyramids looming in the background.

The high value symbols are three Egyptian gods in red, green and blue while the lower values are more basic symbols such as the snake, the ankh, the eye and the water.

The golden ‘W’ is wild and it will replace all standard symbols to help create winning combinations.

The bonus features all revolve around creating winning combos because each time that happens a Power Wild symbol is created; if this wild is then involved in a subsequent win it will trigger the next Power Up feature lined up in the stack on the left hand side:

The first four Power Up features will be a selection of the above and the fifth one will be the Free Spins round in which nine free spins are awarded with three more available each time the spins are activated again. The Golden Glyph appears in this round and this is a wild symbol which applies a multiplier to any wins to which it contributes. The multiplier increases by 1x with each successive tumble.

Golden Glyph is a very enjoyable way to spend a few spins and it’s a game which includes the always-popular tumbling reels and a regular triggering of the Power Up features. It’s smooth, fast-moving and one not to miss.