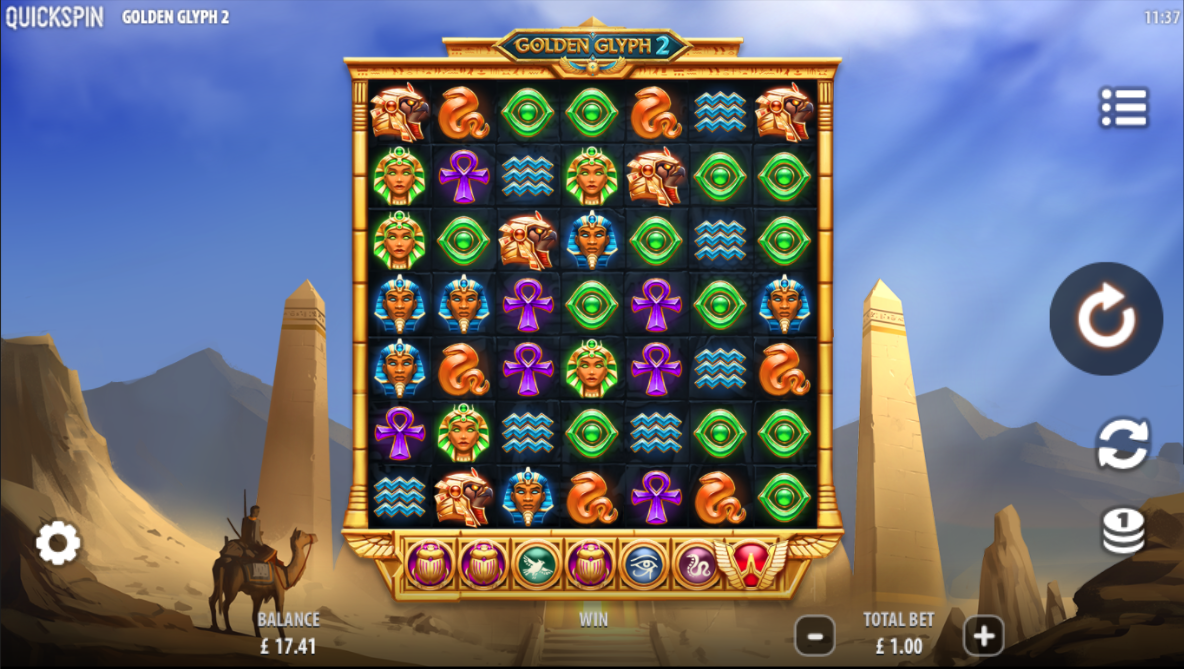 For those online slots fans who’ve previously enjoyed Golden Glyph from Quickspin Gaming there’s now another chance to visit Ancient Egypt in the company of Golden Glyph 2; it has the same cluster-based gameplay mechanic and plenty of new features to keep things interesting.

Golden Glyph 2 plays out on the 7 x 7 area you can see above and the aim is to create clusters of at least five matching symbols connected horizontally and/or vertically; those symbols will disappear and be replaced by more falling in from above to potentially continue the process. The setting for this game is some mountainous Egyptian countryside where a chap on a camel waits to enter the glowing tomb.

There are just five regular symbols and these are Horus, two royal masks and two basic hieroglyphs; the golden ‘W’ is wild and the bonus pyramid is the scatter symbol.

Every time a Tumbling Reels cascade occurs those symbols involved are removed from the reels and a Golden Glyph symbol occupies one of those free spaces; this symbol acts as a wild but it will also trigger one of the features which are represented below the reels if it’s involved in another cluster:

Landing at least three of the bonus pyramid symbols anywhere in view will award seven free spins initially but five more can be won by landing three more pyramids once the round starts.

A Golden Glyph wild appears on the first spin and these are not removed from the reels but they’ll move to a new position with each spin; it carries a win multiplier which will increase by 1x every time it’s part of a winning cluster up to a maximum of 50x.

Golden Glyph 2 is a really entertaining slot which builds on the original and adds some interesting features into the mix; there’s always something happening on the reels and you feel like there’s a nice win just around the corner. There’s an RTP of 96.09%.

Golden Glyph 2 is an Egyptian-themed arcade slot from Quickspin with a 7 x 7 cluster gameplay mechanic.

The Return To Player percentage for Golden Glyph 2 is 96.09%.

How To Win On Golden Glyph 2?

Create clusters of at least five matching symbols connected horizontally and/or vertically. Trigger one of the features.

Where can I play Golden Glyph 2?