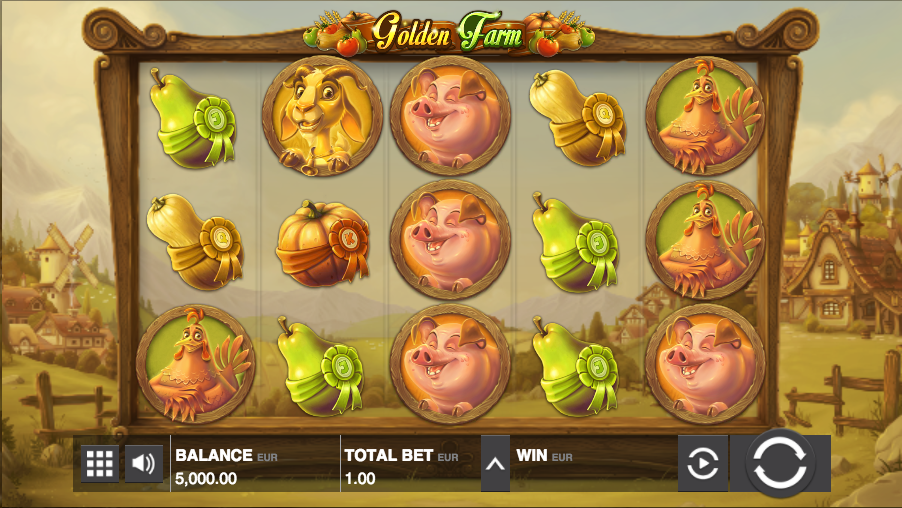 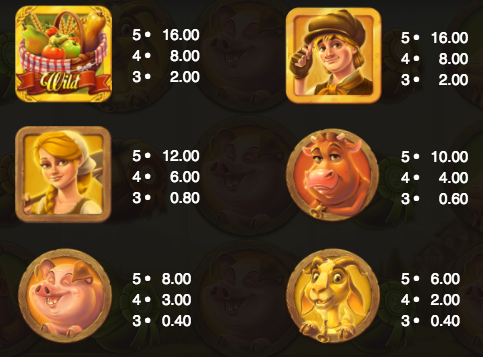 It’s a sunny day down on the farm and that’s good news because that’s exactly where we’re going; Golden Farm is the name of our destination and it’s an online slot developed by Push Gaming with a sunny outlook, some cute animals and a base game bonus feature – read all about it below.

Golden Farm is a five reel slot with three rows and twenty five fixed paylines; the symbols spin within a wooden frame which is placed against an extremely rural backdrop featuring chocolate box houses, windmills, meadows and mountains in the distance.

All the symbols are related to the theme and include the male and female farmworkers, a cow, a pig, a goat, a chicken, a duck and then some prize-winning fruit – a tomato, a pumpkin, a marrow and a pear.

The wild symbol is a basket of fruit and vegetables which will substitute for all others to form winning combinations.

On every spin in Golden Farm one of the five reels will be highlighted and if all positions on that reel are filled with stacked symbols when the spin stops then this feature will trigger. That stacked symbol will spread to the two adjacent reels to create a 3×3 block and a potentially decent win.

If this occurs and there is no resulting win then you’ll get a free spin with that 3×3 block frozen in place for second chance at a win.

Golden Farm is not loaded down with extra features but that doesn’t matter because the Replicating Reels occur regularly and can result in some big wins; this is a high quality game some lovely graphics and sound effects and it comes with an RTP of 96.54%.