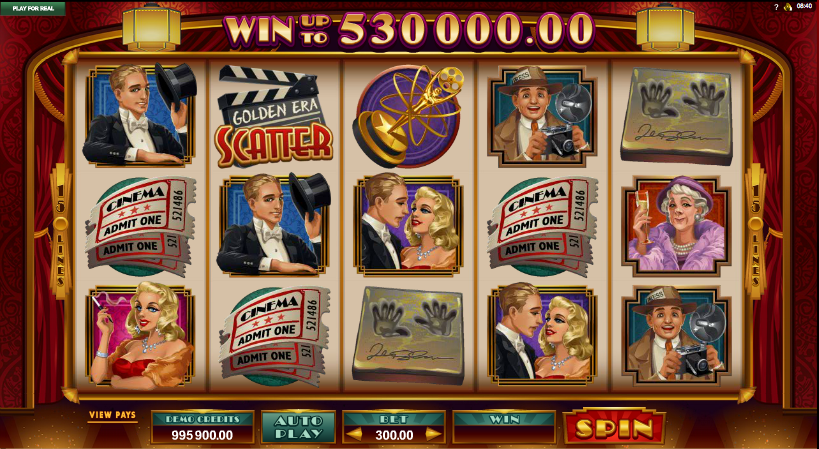 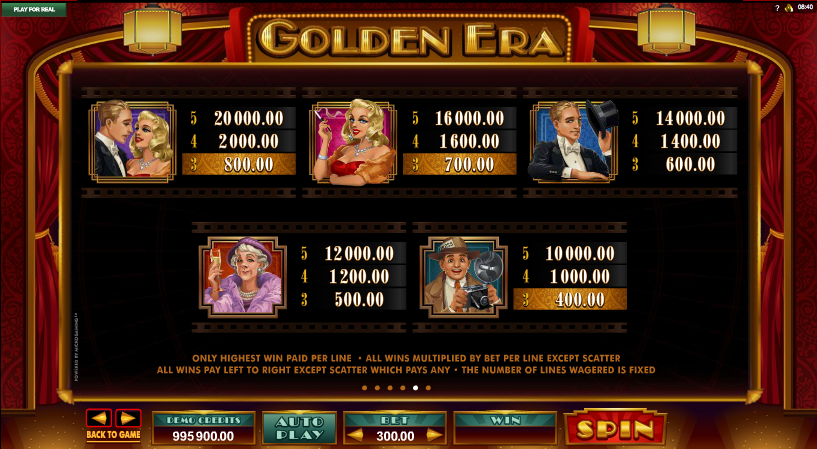 Golden Era is an online slot from Microgaming which celebrates Tinseltown’s finest years. It was a period which stretched for four decades from the end of the 1920s to the early 1960s and took film-making from the silent era onwards. This game is actually set in the 1940s and it’s all about the film stars, awards and glamour which characterise this period in time.

Golden Era is a five reel slot with three rows and fifteen fixed paylines; the jazzy soundtrack, the stage set design and the lettering of the ‘Golden Era’ title fit in perfectly with the theme.

All the symbols are appropriate to the theme and include cinema tickets, Walk Of Fame handprints, a film reel, a camera, a golden award, a luxury car and then five characters from that era.

The Golden Era logo is the wild symbol and the clapper board is the scatter which activates the main feature.

Landing three or more of the clapper board scatter symbols anywhere in view will trigger the bonus and you can choose between the Free Spins or the Double Feature Bonus.

You will receive twelve free spins and on the first spin the leading actor will turn reel one completely wild and the actress will do the same to reel five. They will move to reels two and four respectively on the second spin and then ’embrace’ on reel three for the third spin. This sequences will repeat four times until the spins are over – it’s not possible to re-trigger more spins.

Any wins formed with the Embracing Wild on reel three will be multiplied by 2x.

Here you will be faced with the exterior of a cinema plastered with ten movie posters; just keep picking them for cash prizes until you find the red ‘Pop’ logo at which point the round ends. You may also find the 2x multiplier which will double the value of your picks.

Statistically we don’t know which bonus option is more profitable but we prefer the watching the wins roll in with the free spins. The choice, however, is yours.

We like the theme, the music and the choice of bonus games; perhaps the graphics aren’t bleeding edge but it makes no difference – Golden Era is definitely worth checking out.