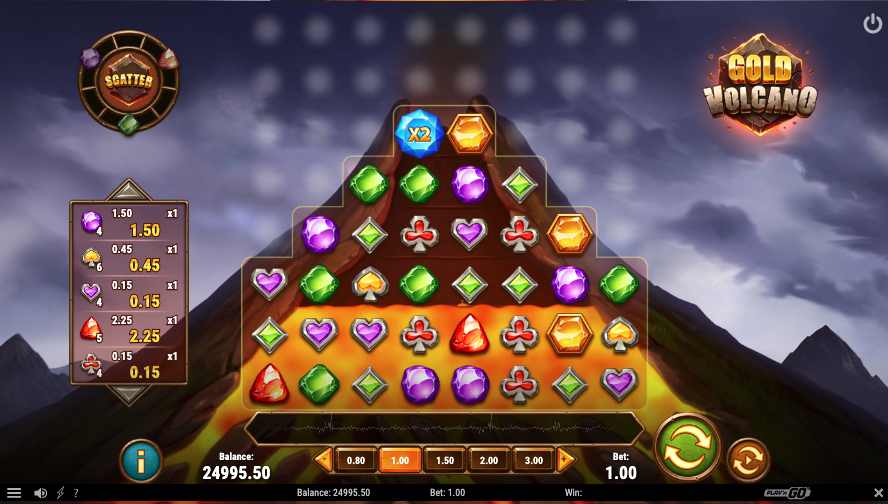 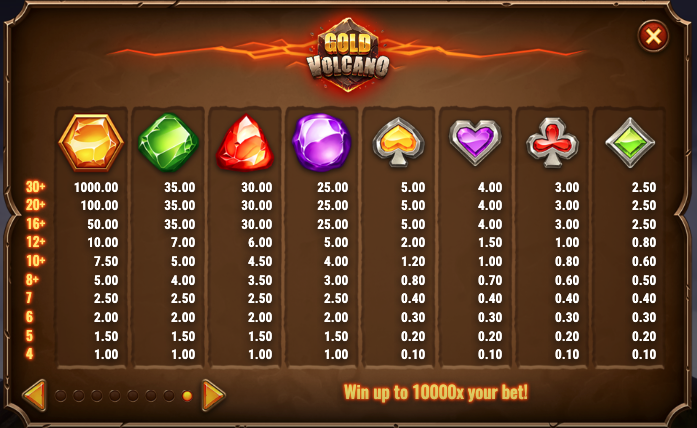 An erupting volcano is not a geographical feature to observe from close quarters unless it’s the inspiration behind an online slot machine such as this one from Play N Go; it’s called Volcano Gold and it combines some gem matching gameplay with lots of base game features and free spins.

Gold Volcano plays out on the screen you can see above and the reels begin in the shape of a volcano; your task is to create clusters of at least four matching symbols after which they’ll disappear and be replaced by more moving upwards to fill those gaps – more clusters may then be formed to continue the process and perhaps trigger some features.

The high value symbols are all gems in various shapes – orange hexagons, green squares, red triangles and purple circles; the lower values are playing card symbols in similar colours. The earth-coloured rock is the scatter symbol.

Wild symbols may be created after a winning cluster is removed and they might also come with a 2x multiplier value attached.

On any non-winning spin one or more of the following features might be triggered:

Scatter symbols are collected on each spin in the meter in the top left corner and once you have certain numbers then specific crystals will turn into the highest value orange hexagons:

With each win and successive upwards cascade the magma in the volcano rises as well – after six wins the magma erupts and five free spins are triggered; during this round symbols will erupt out of the volcano spout to fill up all other spaces, creating an 8×8 reel set with more winning possibilities. Six successive cascades during this round will award one extra spin.

Gold Volcano may not be an online slot in the traditional sense but it’s a very entertaining game with plenty of variation, some engaging gameplay and lots of different ways to trigger features. Tip Top!