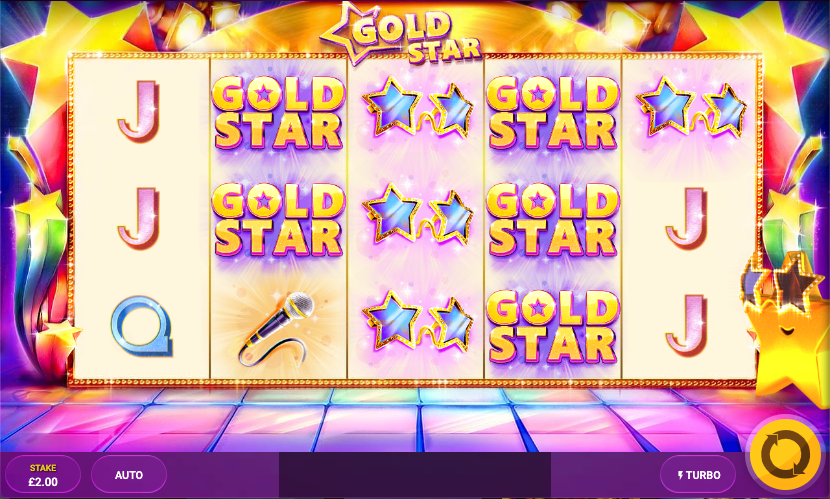 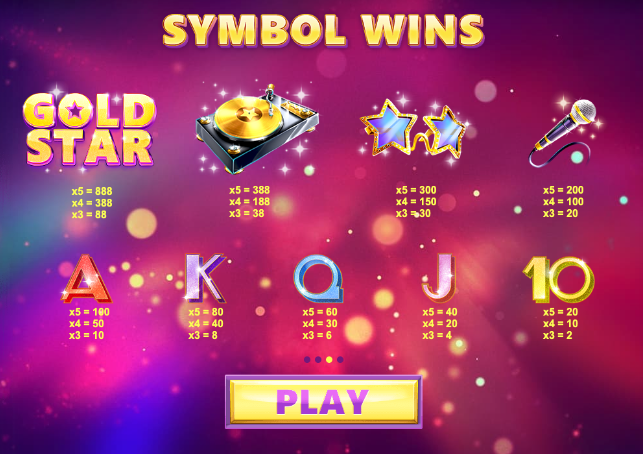 “If music be the food of love, play on, give me excess of it; that surfeiting, the appetite may sicken, and so die.” So said Duke Orsino in William Shakespeare’s Twelfth Night and he might well be correct but he also was probably unaware of Gold Star, this music-themed online slot from Red Tiger Gaming which offers mystery symbols and big wins – keep reading to find out how it all works.

Gold Star is a five reel slot with three rows and twenty fixed paylines; despite the theme of this game the soundtrack isn’t one of its string points but it’s all very colourful with tiny, gold lights surrounding the reels and multicolour stars and spotlights illuminating the dance floor below.

The three high value symbols include the Gold Star logo, a record deck with a gold turntable, star-shaped sunglasses and a microphone; 10, J, Q, K and A represent the lower values. Wins can be formed anywhere on the reels as long as there are at least three matching symbols on a payline.

On any spin stacks of gold discs may land on the reels and when the spin has stopped they’ll all transform into matching symbols with the aim of helping to create winning combinations. The gold star next to the reels may help out here by adding even more mystery symbols to the reels for even bigger payouts.

A lack of bonus features doesn’t detract from what is a colourful and enjoyable slot machine; it may let us down a bit in the musical stakes but that’s easily rectified with a tap of the ‘mute’ button.