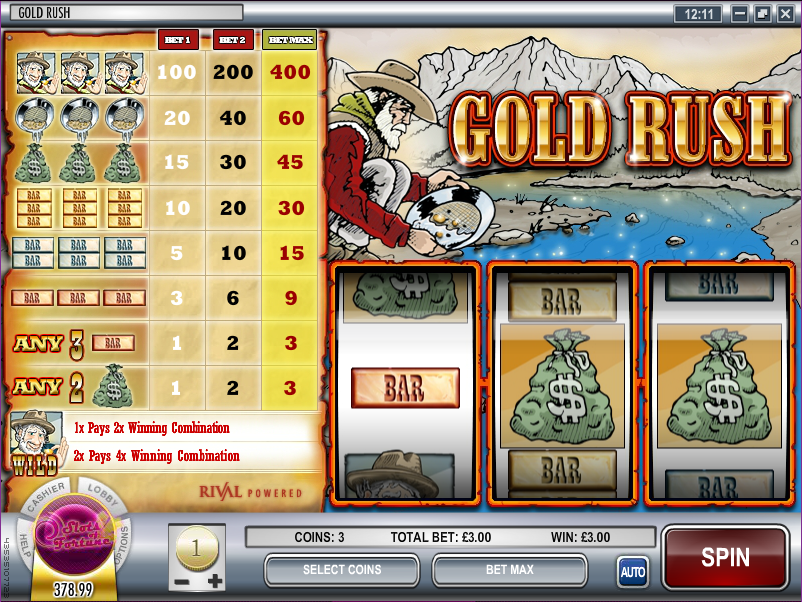 In the era of nuclear fusion and shale gas extraction, the era of the gold rush seems a very long time ago but as recently as the early 20th century huge numbers of hopeful prospectors would make their way to locations in the United States and Australia among others to try their luck. Plots would be staked out and the lucky few would become instantly wealthy. As slots players we would also appreciate a bit of instant wealth and you might manage a little bit of profit by playing Gold Rush, a classic slot from Rival Gaming.

Gold Rush is a three reel game with one single payline and you can see our slightly glum-looking, white-bearded prospector optimistically shaking the silt around in his tray. Underneath him are the big reels and on the left hand side is the payable to display your potential winnings.

There are some nice theme-related symbols here including a bag of nuggets, single, double and triple gold bars, the prospector’s tray and the man himself, cheerfully holding up a sizeable nugget.

The prospector is also the wild symbol and landing one or two of him in a winning combo will multiply those winnings by 2x and 4x respectively. Three will pay the highest payout of 400x your stake.

Bags of nuggets will pay out for two symbols anywhere on the payline and similar small wins are also available for three mixed bars.

All you need to do is set your stake using the ‘+’ and ‘-‘ buttons underneath the payable and then decide whether you would like to double or triple that stake by increasing the coin value.

There’s an incentive to increasing the coin value because not only are the prizes raised proportionately but the highest payout is 4x the basic jackpot, rather than three.

This is an engaging-enough three reel slot which has a couple of added extras such as the wild symbol and the bags of nuggets which are almost scatters. Classic slots fans will be at home here.