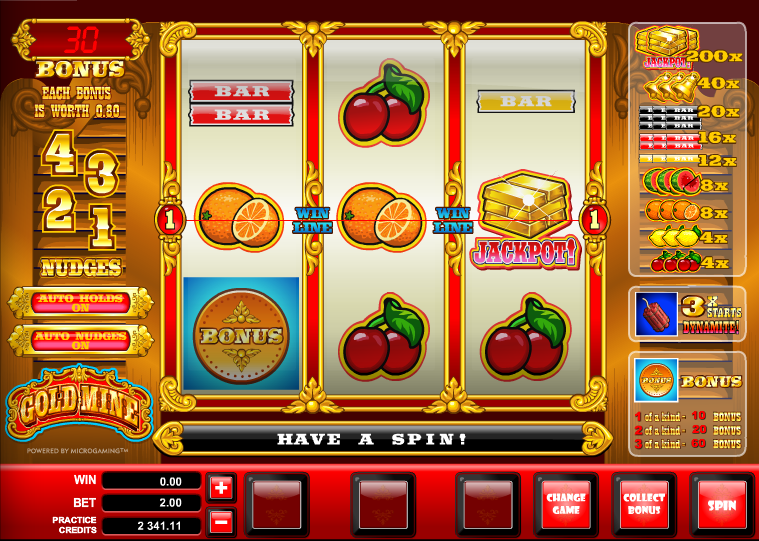 Not all three reel online slot machines are completely featureless; an increasing number of newer games include innovative extras – perhaps to draw in those players who prefer the five reel slots.  Whatever the reason, slots such as Microgaming’s Gold Mine are breathing some life into this genre and this is a game with plenty of extras.

Gold Mine looks basic enough when you first load it up although you can see various bonus features to the right and left of the reels.  There are three reels and one payline and some familiar symbols such as lemons, oranges, cherries and some gold bars which will win you the jackpot.  There are two game modes and to reach the second level you need to collect bonus points which act as credits when playing that game.

Land three of the sticks of dynamite on the payline and you will be asked to pick a symbol which will reveal a multiplier; this multiplier is applied your current win.

You need the bonus points to make your way to the Super Game and there are two ways to accumulate them:

All the bonus points are accumulated in the top left hand corner and when you feel like entering the Super Game, just press ‘Change Game’ underneath the reels.

Both these features are available in the base game and awarded randomly – it’s best to let the machine Auto Nudge and Auto Hold for you.

Now you have some bonus credits you can play the Super Game; there are no nudges or holds here but there are two bonus games:

Land three of the gold mine symbols anywhere on the reels and you will be shown three mine entrances; pick one to see a screen displaying nine gold nuggets.  Keep picking the nuggets and receiving rewards until you hit the dynamite symbol which ends the round.

Landing there of the miner symbols anywhere on the reels will start this feature; eleven objects will be displayed and you will pick one.  That object will reveal a number of WinSpins – each WinSpin will give you a guaranteed win so this is worth winning.

Let the game Auto Nudge and Auto Hold for you – it will often nudge down symbols you can’t see and then hold the symbols for you.

Don’t be tempted to spend all your winnings in the Super Game – you can collect the base game winnings at any time.

There’s so much to this game it should suit even the most diehard of feature-lovers.  It looks good and has some authentic slots-style sound effects to accompany your gameplay.