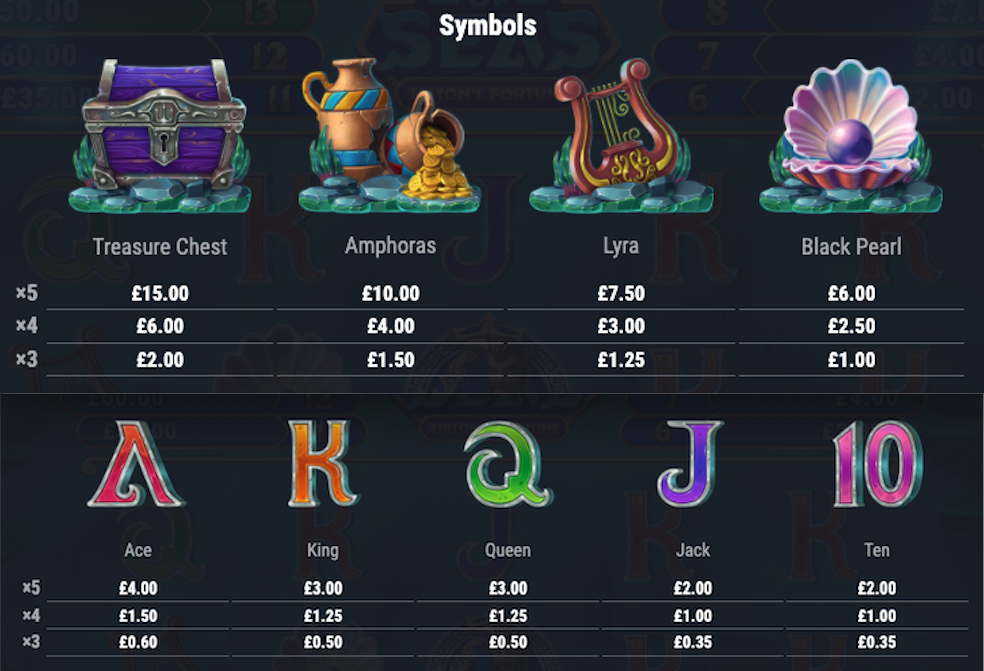 As all online slots fans already know Triton was the son of Poseidon and Amphitrite in Greek mythology and a lesser god of the sea; Gods Of Seas – Triton’s Fortune is a game developed by Foxium/Microgaming themed on this merman of the oceans and comes complete with scatter prizes up to 2000x, and an enhanced free spins round.

Gods Of Seas – Triton’s Fortune takes place on the sea bed where those five reels and twenty paylines stand out amongst the underwater flora and columns in the hazy distance.

The four higher value symbols are all related to the theme and include the purple chest, coin-filled amphorae, lute and pearl; 10, J, Q, K and A represent the lower values. The mermaid is wild and the special symbols are Triton and the free spins scatter.

As you can above the reels there are various jackpot prizes to be won for landing at least six of the Triton scatter symbols anywhere in view with a top prize of 2000x the stake if you can manage to fill the reels with our man.

An easier way to land one of these prizes is to be the recipient of the Triton’s Fortune random feature in which between nine and fifteen Triton symbols will be added to the reels.

This is triggered by landing three of the free spin scatter symbols anywhere on reels one, three and five; you’ll get to play a mini-game first which consists of spinning two wheels – one to award 7, 10, 12 or 15 spins and the other to reduce the number of Triton symbols needs to grab one of those jackpot prizes. This number will be reduced by between one and five.