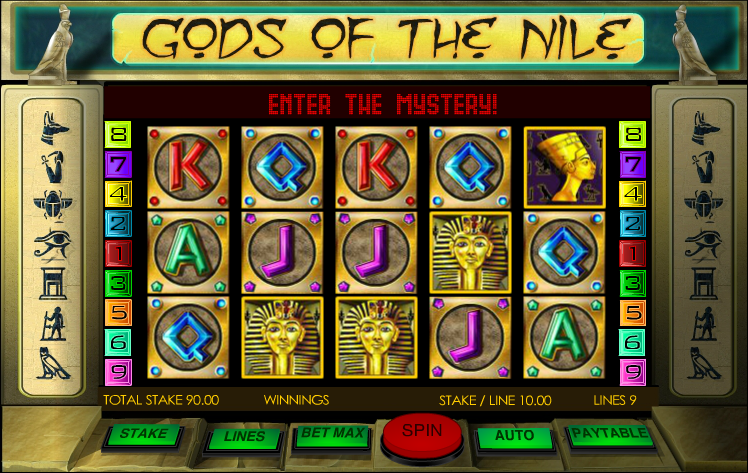 When you’re browsing through the lists of slots at your favourite online casino it won’t take long before you happen upon one themed on Ancient Egypt. It’s a fascinating and exciting period of history to be sure but does it really benefit from so many games based on it’s gods and culture?  Well that’s a question for the philosophers but what we do know is that this is Amaya Gaming’s version and it’s called Gods Of The Nile. Read on to find out more.

Gods Of The Nile plays out over five reels and just nine paylines and anyone who’s played an Egyptian-themed slot before will know how this works – the reels are framed by pillars containing a range of hieroglyphs and two statues of the bird God Horus sit on top.

Aside from the standard, low value playing symbols we have a range of Egyptian symbol including an Ankh, the Eye Of Horus and the Pharaoh’s Mask among others.

The wild symbol is represented by a golden mask while the Pharaoh’s Mask is the bonus symbol which activates the main feature.

There’s just the one extra feature in this game and it’s triggered by landing three or more of the Pharaoh’s Mask symbols on an active payline. Unusually you can also make this combo with the wild symbol and this means that this feature tends to get triggered fairly regularly.

It can be pretty brief and all you need to do is pick a sarcophagus from those displayed in front of you; each will be worth a different multiplier value and if you pick one full of gold you will win that multiplier times your line stake and get to pick again from a different selection. Find one with a dusty mummy inside and your game is over.

The feature is triggered not by a scatter symbol but on an active payline so make sure you are playing with those paylines maxed out.

This is not the best Egyptian-themed slot by a long shot and you can easily find a better one by clicking here and selecting one. Play it only if you want to complete the set.