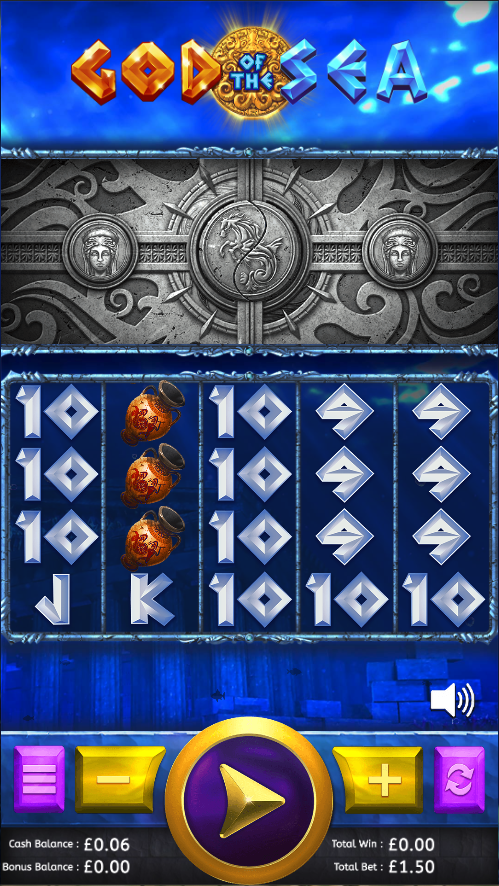 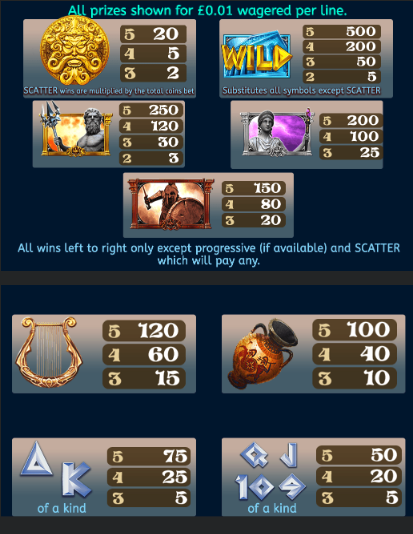 Greek mythology forms the basis for this online slot machine from Rising Entertainment and in particular Poseidon, the God of the Sea; dive with us below the ocean waves to find out all about the multiple base game features and free spins.

God of the Sea is a five reel slot with four rows and thirty fixed paylines; the reel-spinning action takes place underwater in the shade of submerged temple ruins, lit by refracted sunlight from above. The carved area above the reels becomes active during the various features.

The higher value symbols are Poseidon, the warrior and the goddess, a lute and an amphora; 9, 10, J, Q, K and A make up the lower values.

The wild is a big, gold ‘Wild’ which will replace all others to help form winning combinations except for the gold mask scatter symbol.

The following mini-features can be triggered at any time during the base game:

This is triggered by landing three, four or five of the gold scatter symbols anywhere in view for which you will receive 8, 16 or 24 free spins respectively; the first thing to do is pick one Poseidon’s two ‘Power Balls’ to reveal which game mode will be played:

This round can be retriggered by landing more scatter symbols.

By the shape of God of the Sea it’s clear that this is a slot designed primarily for mobile devices but it works perfectly well on bigger screens also; it’s a feature-rich game with the base game bonuses hitting regularly and a nice undersea vibe.