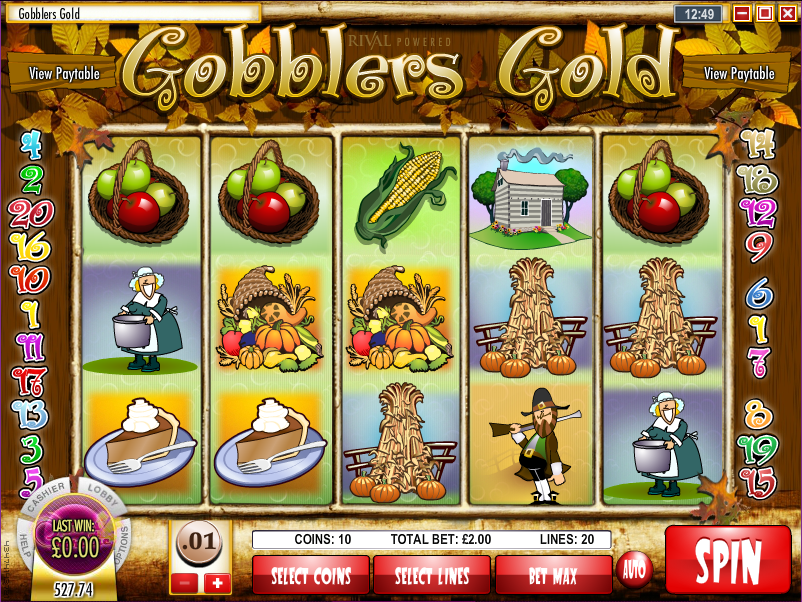 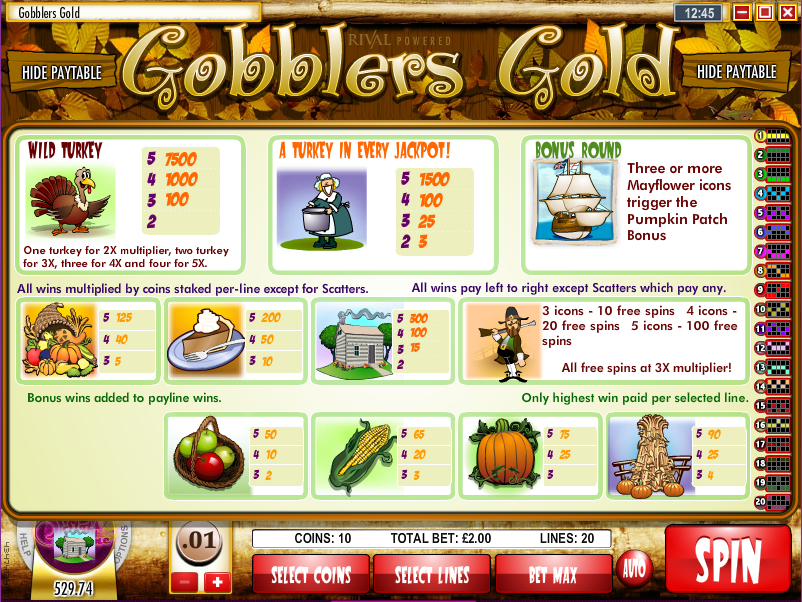 Early in the 17th century the Mayflower set sail from London bound for the east coast of the New World. The ship carried around 130 passengers and crew and landed at Cape Cod in November of 1620. If you didn’t think it was possible to base an online slot on that tale then it’s time to think again – that’s the subject of Gobblers Gold from Rival Gaming.

Gobblers Gold is a five reel and twenty payline slot which makes the early days of the pilgrim settlers look a lot more enjoyable than it actually was. The main symbols  are apples, sweetcorn, a pumpkin, straw, a pile of fruit, a piece of cake, a settlers house and a female pilgrim.

The wild symbol is appropriately a wild turkey and there are two scatter symbols – the Mayflower and the male pilgrim – who each activate their own features.

The Mayflower scatter symbol is the key here and landing three or more of them anywhere on view will kick it off. Iy’s a fairly brief game and you will be faced with a screen displaying lots of pumpkins. All you have to do is pick the pumpkins until you find now one which reveals a prize. Check out the video above to see it in action.

The male pilgrim with the blunderbuss is the scatter symbol which triggers this feature and you will win the following:

Any wins landed during this feature will be subject to a 3x multiplier and there’s always the chance of re-triggering the spins by landing more pilgrims.

The more wild symbols you land in a winning combo, the higher the multiplier:

Both of the features are triggered by scatter symbol so it’s not necessary to use all the available paylines to reach them; if you want to use just one line you will still have the same chance of playing those bonus games.

We like a bit of history in our slots, even if it does make the appalling conditions suffered by the settlers look remarkably comfortable. Some nice graphics and two bonus features mean this is well worth checking out.